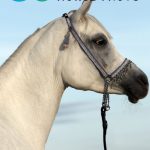 The mystique of the alluring Arabian horse has captivated the hearts and minds of horse enthusiasts all over the globe for thousands of years. As one of the oldest and most influential horse breeds, evidence of ancient bloodlines exists in modern horses today. Here are 9 things you may not know about these majestic horses.

1. The Origin of the Arabian Breed Is Shrouded in Mystery

Even today, nobody knows exactly where the Arabian breed began.

Pictographs and other artifacts depicting horses with dished faces appeared in Mesopotamia and Ancient Egypt, but the Arabian was probably born in the deserts of the Arabian Peninsula more than 4,000 years ago.

Most of the credit for the Arabian’s rich history belongs to the ancient Bedouin people. These nomadic tribes traveled through the harsh desert climate with their horses, living and working closely together. They kept meticulous histories of the animals as they refined the breed, passing down pedigree information orally through generations.

This careful, selective breeding resulted in one of the most beautiful and versatile horse breeds – a legacy that continues to this day.

2. Mares Were Prized over Stallions

The Bedouins prized mares over stallions. Female horses are generally quieter and easier to handle, which are necessary traits for war horses in stealth raiding parties. Sneaking into an enemy’s camp is a lot easier if your horse isn’t likely to give away your position.

Also, resources like food and water are scarce in the desert. Only the most valuable horses were kept, and so colts were often sold or culled out of necessity.

3. Arabians Are Horses of Myth and Legend

Because Arabians are an ancient and mysterious breed, they have always been popular in myths and legends.

The Muslim Prophet Muhammed sent his desperately thirsty herd galloping into the desert towards an oasis. In a test of loyalty, he called them back to him before they could reach it.

Only five mares obeyed the call, and they became his five favorites. Legend has it that those five mares spawned the five distinct families of Arabians: the Kehilan, Seglawi, Abeyan, Hamdani, and Hadban.

The Bedouins developed these horses over time, and they all have distinct characteristics. Some breeders maintain that the legend is true, and that their bloodlines trace back to those original horses.

King Solomon and the Queen of Sheba

Wanting to experience for herself the fabled wisdom of King Solomon, the Queen of Sheba visited him in Jerusalem. The journey from Sheba in southern Arabia to visit King Solomon would not have been an easy one.

Upon her arrival, the Queen of Sheba was said to have given King Solomon an Arabian mare named Safanad, which means “the pure.”

In the tale of Abraham’s son Ishmael, the angel Gabriel descended from heaven in a thunderstorm of wind and rain. Gabriel commanded the storm to stop raging, and a horse was left in its wake – the “drinker of the wind.”

The Arabian was incredibly important for the spread of Islam. Many say that Allah himself created the Arabian, and horses with larger “jibbahs” (just below the forehead and between the eyes) were filled with his divine presence.

4. They Have Unusual Conformation

An Arabian is a beautiful, graceful animal. Their distinct appearance makes them instantly recognizable, even to a casual equine enthusiast. Arabians have unique characteristics that set them apart from other breeds:

5. They Are Popular in Print, Film, and Entertainment

Arabians are not only popular in ancient myths and real life, but they are commonly found in books and on movie sets. Here are some of the famous Arabians to appear in books and movies over the years:

Many Arabians were also used in films like Hidalgo, The Young Black Stallion, and Ben-Hur.

6. Arabians Are Stars of Science!

In Poland, researches studied the effects of music and massage on young Arabian racehorses. The results were then applied to several studies on horses in the UK and the US, subsequently improving their quality of life.

Arabians are “hot-blooded” horses, and music can relax them. If your horse is feeling anxious, consider adding some calming, new age music and a massage to your routine.

7. Arabians Are a Global Phenomenon

Arabians have always dazzled and impressed people in their native homeland of Saudi Arabia, but their influence quickly spread worldwide as they were given as prized gifts or spoils of war.

In Egypt, Poland, Russia, and the Austro-Hungarian Empire, the breed became popular and developed into different types with specific characteristics and strengths.

Lady Anne Blunt, a well-traveled lover of the breed, opened Crabbet Park in England in 1878. The influence of her quality well-bred horses continues to this day. The Godolphin Arabian was a foundation sire for the Thoroughbred, another English breed that had a profound impact on horses around the world.

While it took a little longer for Arabians to reach the Americas, the influence of their bloodlines cannot be overlooked – especially in American breeds like the Morgan, American Saddlebred, Quarter Horse, and Thoroughbred.

During the Revolutionary War, George Washington fancied a handsome half-Arabian named Blueskin, who is often depicted in historical paintings.

8. They’re One of the Most Versatile Horse Breeds

Arabians are suited for almost every equestrian discipline. They are beautiful, athletic, and intelligent. Whether you ride Western or English, casually or competitively, an Arabian will probably suit your needs.

These horses spent thousands of years working closely with humans – the Bedouins often brought them into their tents for shelter from weather or thieves. Because of this, Arabians tend to have excellent temperaments.

In the upper levels of competition, Arabians particularly excel in endurance events – their stamina and speed are unmatched.

In the 1980s, Arabians were all the rage. As their popularity grew, horses were selling for millions of dollars, but it was only a matter of time before the bubble burst. Many Arabians were cheaply sold, slaughtered, or cross-bred.

While the Arabian Horse Association requires the registration of a dam and sire for the foal to be registered as well, crossing Arabians with other breeds often improves them – or creates an entirely new breed altogether (like the Anglo-Arab, or National Show Horse).

Is an Arabian Right for You?

Whether you believe that Arabian bloodlines should remain asil (“pure”) like the ancient Bedouins, or you prefer a more modern mix, the influence of Arabian blood almost always improves whatever breed it’s mixed with. Arabians are versatile, athletic, and possess an ancient spirit that captivates hearts and minds around the world.