*This post may have affiliate links, which means I may receive commissions if you choose to purchase through links I provide (at no extra cost to you). As an Amazon Associate I earn from qualifying purchases. Please read my disclaimer for additional details.

Most people think of well-trained dogs when they hear the phrase “livestock guardian.” But did you know that donkeys can be excellent herd protectors?

These long-eared sassy equines are generally friendly and easygoing – but they’re tough, too. They can be stubborn, territorial, and aggressive towards predators.

Because of this, having a guard donkey around to protect your herds of sheep or goats can be a great choice, especially for a small ranch or hobby farm.

Here are 13 reasons why your ranch needs a guard donkey.

1. It’s part of their job description.

Donkeys were domesticated thousands of years ago, and they’ve been an important source of meat, milk, and transportation ever since.

While donkeys still provide these valuable services around the world, they’re more useful in developed countries as pets or – you guessed it – livestock guardians.

Long ago, people figured out how handy it was to keep a donkey around their flocks, protecting them from predators and alerting shepherds to danger.

This tradition continues today, and a protective guard donkey can be just as effective as a growling guard dog.

Like other prey animals with their eyes situated on the sides of their heads, donkeys have a wide range of vision. This allows them to see potential threats all around them while they graze in an open pasture.

They have long ears and good hearing – they can use their ears independently to effectively pinpoint the source of a disturbance.

Donkeys are also equipped with large teeth and strong hooves, both of which can be used to fight off attackers.

3. They stand their ground.

When it comes to a donkey’s instincts to “fight or flight” – they often choose to fight. They’re naturally less nervous and skittish than their horse cousins, and they won’t run away at the first sounds of danger.

Donkeys are curious and confident, which means that they’re more likely to face an opponent head-on instead of running away.

Smaller predators such as foxes or lone coyotes usually prefer to avoid confrontation if they can help it. They may think twice when faced with the pummeling hooves of a territorial donkey.

4. They defend their turf.

Donkeys are naturally territorial – and they don’t like anyone messing with their turf.

It’s not that donkeys are protecting your livestock as much as they’re defending themselves and their territory. And a good guard donkey will keep the predators out.

Donkeys don’t patrol their territories like a dog might, but they stay alert and use their long ears and wide range of vision to stay vigilant against intruders.

Donkeys are instinctively wary of dogs and their canine cousins. Many domesticated donkeys have no trouble getting along with a well-trained ranch dog or pet, but many donkeys do not appreciate their presence.

This is handy against canine threats such as wolves or coyotes.

If you’re thinking of adding a guard donkey to your menagerie, make sure that they are well socialized with your dogs (and recognize them as friends, not a threat).

6. They’ve got a built-in alarm system.

Donkeys don’t whinny or neigh like horses. Instead, they make a loud wheezing noise that can sound like a scream.

Technically, the obnoxious “hee-haw” noise you typically hear from a donkey is called “braying” – and they’re quite good at it.

While a guard donkey won’t waste time alerting human owners to a threat (like a barking dog), their loud braying can be a helpful indication that something is up.

Some donkeys are quieter than others, and some may need to be trained to learn when to bray (and when to keep quiet).

7. They’re large and in charge.

If you’re going to choose a donkey as a livestock guardian, make sure that it’s a standard-sized donkey or larger (not a mini donkey).

A good-sized donkey can weigh anywhere from 300 – 500 pounds or more, and is a formidable opponent for a lot of smaller predators.

A bear or mountain lion could easily take down even a mammoth donkey if they choose to, but foxes and coyotes usually won’t mess with a standard donkey – even if they’re alone (source).

Unlike dogs, donkeys can be kept in the same paddock or pasture with their charges.

They can usually graze on the same pasture, and don’t require special shelter (although they will require adequate shade and protection from the elements).

Always make sure your donkey has appropriate supplementation if need be, and all animals should have access to fresh clean water.

9. They’ll guard your ranch for years to come.

A healthy donkey can live for thirty years (or more!). An experienced guard donkey can easily live amongst your livestock for years before retirement.

10. They’ll protect all kinds of other animals.

Guard donkeys excel at protecting small herds of sheep or goats. While they can get along with chickens, they aren’t as effective at protecting them from small predators (such as rats or hawks – although they will kill snakes on occasion) (source).

Donkeys don’t consider these small predators to be much of a threat to them, and therefore won’t be too bothered if a hawk makes off with one of your chickens.

However, for animals susceptible to predation from larger threats, a donkey can make a formidable choice.

While it’s important for your donkey to be well-handled and used to people, a guard donkey doesn’t need to be your best buddy in order to be good at his job.

A well-socialized donkey just needs the basic necessities to live his life comfortably in a pasture with little intervention from humans.

Donkeys are pretty hardy, generally don’t need fancy vet care (they don’t tend to startle and run through fences), and they are usually pretty easy keepers.

12. They can be easier to handle than dogs.

Having a well-trained guard dog can be very useful for a farm, but training one takes time and experience.

Not every hobby farmer wants to keep a large guard dog, or invest the time making sure he doesn’t go after the livestock he’s trained to protect.

A barking guard dog can also be off-putting to farm visitors, and a donkey may be a more docile choice.

Donkeys are prey animals themselves, and don’t view their herdmates as food. However, they can still be aggressive – especially intact male donkeys.

It’s better to use jennies (female donkeys) or castrated males to protect your herds or flocks.

While a well-trained and effective guard donkey can be costly, you can often find adoptable donkeys in need of a new job.

These donkeys may need to be trained to gain experience, but many will naturally do the job just fine once they are well-socialized with their charges.

If you want to adopt a guard donkey, there are tons of resources with which to do so. Contact your local rescues, large animal shelters, or adoption websites to find your perfect match.

Just be aware that your donkey must be properly introduced and socialized with your herd before expecting him to protect them. Not all donkeys are suited to become guard donkeys, either, so keep that in mind.

The Bureau of Land Management offers several programs to help connect potential adopters with wild donkeys in need of a home.

Adopters can receive a cash incentive of up to $1,000 for adopting a wild, untrained donkey (blm.gov). Sometimes, donkeys will be available via the Trainer Incentive Program, and can be adopted for as little as $125.

These wild burros can become excellent guard donkeys because they’ve spent their lives out on the open range, protecting their herds from danger.

But don’t forget, an adopted wild donkey will likely need more socialization and training working with humans to be an effective livestock guardian.

Is a guard donkey right for me?

While donkeys can provide a valuable service by protecting a hobby farmer’s flocks, not all donkeys are suited for the job.

They may be too docile and friendly to look out for predators. Or they may be too aggressive and wild to be safely left alone with your livestock.

A good guard donkey will scare off predators, alert his herd to danger, and hopefully thwart any attacks.

Make sure you do your part by having good fencing, and a good system in place to scare off any bigger threats to give your guard donkey the best chance possible.

It’s also a good idea to raise your guard donkey with their herd from a young age, as it will make them well-socialized and experienced (source).

I've owned horses for 25 years and have a particular love for gentling wild horses. I write these articles to help others learn more about horses. If you enjoyed the article please take a moment to pin it to Pinterest or share on social media. It really does help! Check out my about page for more detailed information. 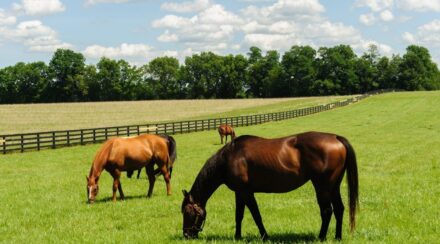 13 Ways to Put Weight on a Thoroughbred

Helpful Horse Hints is owned and operated by Lairic, LLC, an California limited liability company. Lairic, LLC is a participant in the Amazon Services LLC Associates Program, an affiliate advertising program designed to provide a means for sites to earn advertising fees by advertising and linking to Amazon.com. Lairic, LLC also participates in affiliate programs with Awin, Clickbank, CJ, ShareASale, and other sites. Lairic, LLC is compensated for referring traffic and business to these companies. There is never any additional cost to you.