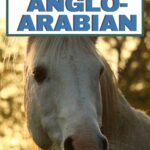 Horse breeders have been crossing Arabians and Thoroughbreds since the 18th century (although the “Anglo-Arabian” as we know it today wouldn’t appear until nearly a hundred years later). In fact, the Thoroughbred breed was born when fine English riding horses were crossed with three specific Arabian stallions – and the rest is history.

Today, purebred Thoroughbreds and Arabians are popular racing horses – built and bred for speed, stamina, and heart. So what happens when you cross an elegant Arabian with a lean Thoroughbred speed machine?

You get an Anglo-Arabian – an athletic and versatile sport horse that is perfect for equestrian competition. Keep reading to learn more about these incredible athletes!

The foundations of the Anglo-Arabian breed as we know it today began in France in the mid-1800s. Breeders in Normandy began crossing Arabians and Thoroughbreds as early as 1750, but a concerted effort was made to create a distinct breed in 1836 under the French National Stud Service.

They crossed imported English mares with Arabian stallions and produced a swift, athletic horse that was used for racing.

Napoleon Bonaparte himself fancied Arabians, and he brought several fine stallions back with him from his tour in Egypt.  By 1833, breeders at the Le Pin Stud farm crossed a bay Arabian stallion named Massoud to two English mares named Selim Mare and Deer. Thus creating not just a poplar crossbreed, but a breed specific to itself. It was here that the Anglo-Arabian breed was born.

The Anglo-Arabian was once a popular cavalry horse – spirited and bold, but trainable and willing. They had strong feet and bones, and rarely went lame.

Once cavalry horses were no longer needed after World War I, Anglo-Arabians were a popular choice for equestrian sports. They excelled in eventing, showjumping, and dressage – the trifecta of equestrian disciplines at the Olympic games.

As mechanization slowly replaced the horse in daily life, breeders became more focused on producing top contenders at the highest levels of competition.

While Anglo-Arabians are often beaten by other warmblood breeds, they still often appear at the Olympic games. Also, many warmblood horses have Anglo-Arabian bloodlines in their pedigrees (the Selle Francais, for example). (source)

In Portugal and Spain, Anglo-Arabs are bred by crossing English Thoroughbreds with Spanish Arabian mares. These Anglos are used by the Spanish Army Remount Commission for military teams, and are popular in international competitions.

In England, Anglo-Arabians participate (and win!) consistently at Arabian breed shows. They also excel when competing in Arabian-specific races, as they are allowed to compete as part-breds.

The Sardinian Anglo-Arab is considered a separate breed (although they are often marketed as Anglo-Arabians). In the late 19th century, Italian breeders crossed Anglo-Arabian stallions with indigenous Sardinian mares to produce cavalry horses.

They are often used in the famous Palio di Siena – an annual horse race in the center of Siena Square. Anglo-Arabians tend to have stronger legs than Thoroughbreds, which are necessary for the tight turns required in this unique race.

Today, Anglo-Arabians are versatile riding horses, and are especially popular in sports like eventing. These horses can show off their elegant movement and tractability in the dressage ring, their powerful jumping ability in the showjumping arena, and their ample stamina on the cross-country course.

Anglo-Arabians have been popular in eventing competition since the 1920s, when the sport was first added to the Olympics. Their Thoroughbred pedigrees often make them more effective over fences than purebred Arabians, but their delicate looks and refined movement often make them better at dressage than the long and lean Thoroughbreds.

Anglo-Arabians make fine pleasure riding horses as well, and some owners may choose to show them in low-level dressage or jumping. Their attractive good looks often make them good candidates for hunter classes, in which the horse’s form is judged over fences.

Because Anglo-Arabs are produced by mixing two specific breeds together, their appearance can be quite varied between individuals. They average between 15.2 – 16.3 hands, which can be smaller than other sport horse breeds. They are generally solid colors – chestnut, bay, brown, or gray.

Ideal Anglos resemble Arabians in conformation, but they should not look too much like either an Arabian or Thoroughbred. They usually have long necks, prominent withers, and compact bodies, with long strong legs and feet. They will also have the smaller refined heads that reflect their Arabian bloodline, but without an overly dished profile. (source)

Anglo-Arabians are well-known for a trait called “hybrid vigor.” This means that crossbred animals often possess the best qualities of both parents, without the problems that linebreeding (inbreeding) can sometimes cause. Crossbreeds are often healthier than their purebred counterparts because they can have more genetic diversity in their bloodlines.

Anglos are known for their soundness and longevity, and many are often willing and able to work well into their twenties and beyond. Many top performance horses have no soundness issues, even though jumping and competing can often be very hard on a horse’s legs.

Though Anglo-Arabs often have stronger bones and legs than their Thoroughbred counterparts, they may be susceptible to some of the genetic diseases that afflict Arabians, such as Lavender Foal Syndrome or Equine Severe Combined Immune Deficiency.

Many of these genetic diseases are detected by DNA tests and are often prevented by responsible breeding – and aren’t something a casual buyer needs to worry about if the horse is over five years old and you have no intention of breeding it.

Both Thoroughbreds and Arabians are known to be “hot-blooded”, which means that they can be spirited and hard to handle. However, both of these breeds are often friendly and trainable, and both are known for their big hearts.

While an Anglo-Arabian may not be the first choice for a beginner looking for a seasoned lesson horse, they can make the perfect choice for a bold rider looking for a true partner in the show ring. Anglos are trusting, confident, and athletic – and often easier to manage than some of the other warmblood breeds.

Many Anglo-Arabians have taken home medals for their countries at various Olympic Games:

The cost of an Anglo-Arabian can vary widely, depending on what you’re looking for. For a young colt, filly, or project horse, prepare to pay anywhere from $4,000 – $10,000+, depending on pedigree. For a seasoned competitor proven in the show arena, the cost can increase to $50,000 (or more!).

Is an Anglo-Arabian right for you?

While Anglo-Arabians can make wonderful pleasure horses for hacking around a farm, they are generally more suited for those looking to compete. These sporthorses can be somewhat hard to find (and expensive) if you’re looking for a well-bred and registered competition partner.

However, you may have more luck looking for a “part-bred Arabian” instead. You’ll often find an Anglo-Arabian with this designation, but one with plenty of fine Thoroughbred breeding in the pedigree.

Like all breeds, every horse is an individual – especially when it comes to breeds that are not completely standardized and have more open studbooks. Always consider your goals before purchasing a new equine companion!