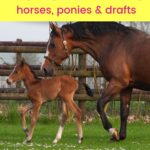 Did you know there are over 150 distinct horse and pony breeds that live in Germany today? While many of them are imports from other countries, Germany has a long and complex horse breeding history. Nearly 50 of the 150 horse breeds listed by the Domestic Animal Diversity Information System originate wholly or in-part from German soil. Here are 15 of the most popular German horse breeds.

Most of the German warmbloods possess similar qualities – and they all excel at equestrian sports. Because their studbooks are more open than other breeds, there is often a lot of intermingling between them. For example, a Bavarian warmblood may be mostly genetically Hanoverian but bear the Bavarian brand.

However, most German warmbloods do share some common characteristics. Most sport horses are between 15.2 and 16.2 hands tall, as this is generally the best height for dressage and jumping. These horses are rigorously inspected to ensure quality before they are allowed to be bred.

German warmbloods may be any color, although solid colors are preferred. They are all known for being highly athletic, but also agreeable and trainable – amateurs prefer horses with good “rideability.”

This means they have good gaits and good temperaments and are therefore easier to ride. They are generally healthy and long-lived, although they may be prone to health problems caused by the rigors of a grueling competition schedule.

Like other German warmbloods, Bavarian warmbloods are athletic amalgams of various sport horse breeds including Holsteiner, Hanoverian, Thoroughbred, and many others. Their predecessors were called Rottalers – a heavy warmblood horse used primarily for agriculture and pulling carriages.

Today, the Bavarian warmblood has almost completely replaced the Rottaler as a popular warmblood choice for equestrian sports, because the need for such heavy utilitarian horses faded after World War II. Bavarian warmbloods excel at showjumping, eventing, and dressage, but they are also found in combined driving or hunter rings.

These agreeable, athletic horses are often found at the highest levels of international competition. Because these horses are bred for athleticism and temperament, there is no set standard for what a Bavarian warmblood should look like. However, they generally have rhythmic gaits, elastic knee action, and are talented jumpers.

The breed began in the 15th century, but a standardized breeding effort began in 1788 by King Frederick Wilhelm II to produce quality, versatile horses. With the influence of the Hanoverian, Trakehner, and Thoroughbred, a powerful sport horse was born.

Today, the Brandenburger is still popular in Germany for pleasure riding and competition, due to its athleticism and agreeable disposition. This warmblood breed excels at riding and driving, and is often found in showjumping and dressage.

The origins of the Hanoverian began in the early 1700s when King George strengthened the commercial horse trade between England and Germany. Horses were traded freely between the two countries, and athletic German coach horses were improved with Thoroughbred, Cleveland Bay, and Yorkshire Coach Horse breeds.

Two types of Hanoverians emerged that were predominantly used by the military– a strong type for pulling heavy carriages and artillery, and a lighter riding horse for the cavalry.

Fast forward three hundred years, and the Hanoverian still remains an excellent riding and driving horse. They are elegant, athletic, and versatile, and consistently perform as world-class athletes in show jumping and dressage.

They are popular in the hunter rings as well, due to their naturally good form over fences. Their good gaits and willing natures also cause them to excel at dressage. The Hanoverian stud generally places in the top five of the yearly FEI studbook rankings.

The first records of the Holsteiner breed appeared in the 13th century in a monastery at Uetersen. By the 15th century, the monks were breeding fine cavalry horses that could also serve the agricultural needs of the land.

These strong riding horses were used for pulling carriages, plows, and they were also used for riding. They were then exported in large numbers to fight for France in the Napoleonic wars.

Today, Holsteiners remain an athletic choice for equestrian competition. They are much lighter than their original counterparts at the monastery, thanks to the influence of Thoroughbred and Arabian blood.

Holsteiners have good gaits, a fine presence, and excel at showjumping, eventing, and dressage.

The Mecklenburger comes from the Mecklenburg-Vorpommern region of Germany, and is an athletic warmblood similar to the Hanoverian. The original Mecklenburgers were utilitarian – these economical horses were efficient and hardy.

Mecklenburger horses were primarily used as cavalry mounts, in agriculture, and pulled stagecoaches. Later, the breed was infused with Arabian and Thoroughbred influences, which created a lighter all-purpose horse that is primarily used as a sport horse today.

These “luxury carriage horses” began as high-stepping mounts for pulling carriages. They were also used by the cavalry, and for agricultural use on small farms (like most German warmblood breeds).

The Oldenburg is a refined breed with powerful movement and high knee action, which makes them successful sport horses today.

They are one of the most popular warmblood breeds, and consistently place highly in the FEI studbook rankings. For the Oldenburg, “quality is the only standard that counts,” and horses are bred based on their ability to perform – rather than maintaining strict bloodlines.

Like other German warmblood breeds, the Westphalian was bred to be an all-purpose horse to serve the people of East Prussia in the 1700s. They began as lighter riding horses, similar to the Trakehner.

As more people moved to the area, the need for an agricultural horse grew, so the Westphalian became a utilitarian riding, driving, and farm horse. However, the focus shifted once again to the heavier Rhenish Cold Blood – a heavy draft horse better suited to pulling artillery and plows.

Once the advent of mechanization began to replace horses on farms, the need grew for agreeable sport horses for recreation. That’s when the Westphalian became the breed as we know it today – an athletic riding horse that is suitable for dressage, showjumping, and eventing (though they particularly excel at dressage due to their elastic gaits and willing natures).

The Westphalian studbook has one of the largest populations of any in Germany, second only to the Hanoverian.

The result was an agricultural horse that was also suited for riding as well. Today, the Wurtemberger is a popular riding horse used for dressage and show jumping, and is lighter than its foundational counterparts.

The origins of the Zweibrucker began as a horse that was “good, handsome, and useful.” The horses at the state stud at Zweibrucken saw many changes over the years, with influence from the French Anglo-Norman, Thoroughbred, and Arabian to create swift cavalry horses for the military. Later, as heavier drafts replaced these light riding horses, the Zweibrucker became a useful farm horse.

Today, the Zweibrucker is a versatile sport horse, excelling in combined driving, dressage, show jumping, and eventing. They have powerful elastic gaits and a willing disposition.

Like other German warmbloods, young Zweibruckers are evaluated at a young age for the ability to be entered into the studbook. They must have correct conformation, but they must also perform well over fences while free-jumping as well.

Warmbloods aren’t the only breeds that were born in Germany. Many different types of heavy German “coldblood” draft breeds appeared over the years, and some still remain today.

Large draft horses were generally needed for agricultural and military purposes, but mechanization has made them mostly obsolete. Germany still has some home-grown cold blood breeds, and they are often used in pulling competitions, sustainable agriculture, and cultural events.

In the second half of the 19th century, farmers faced an unusual predicament in the Rhineland area of Germany. Their farms were covered in areas of silty sediment called loess. This made breeding a suitable working horse difficult, as imported draft horses had trouble acclimating to the climate and heavy soil.

Eventually, the Rhenish German Coldblood emerged – a strong, powerful draft horse that normally stands over 15 hands high and can weigh over 2,000 pounds.

Due to the political issues in Germany that lasted until the fall of the Berlin wall in 1989, breeders were unable to cross horses from the Eastern part of Germany with those from the West.

So, several types of Rhenish Coldbloods emerged from the Eastern part of Germany. Although these three subtypes look very similar to Rhenish Coldbloods from the West, they are genetically distinct. They are often shades of bay or chestnut, with black points.

The Schleswig Coldblood comes from the Jutland Peninsula – a region that is split between Denmark and Germany. They are similar to the Danish Jutland, which is a muscular breed most known for pulling the famous beer wagons of the Carlsberg brewery.

Schleswig Coldbloods also share ancestry with the Suffolk Punch, and are also generally flaxen chestnut in color. These medium-sized draft horses are fairly rare and are listed as endangered by the FAO.

The South German Coldblood shares common ancestors with the Austrian Noriker, a spotted draft horse from the Alps. They are somewhat rare, with only around 2000 individuals left in 2013. However, they are not listed on the FAO’s endangered list and are Germany’s only draft horse to avoid this label.

South German Coldbloods are medium-sized draft horses, standing an average of 16 hands high and weighing around 1,100 pounds. They are usually chestnut or bay, but they can sometimes have the distinct leopard spotting of their Noriker cousins.

These endangered light draft horses have a striking appearance – they may only be shades of chestnut with a flaxen mane and tail. The breed began in the Black Forest region of Baden-Wurttemberg in the early 15th century, and was used for forest work and in agriculture. Today, they are generally used in harness, but they have also become more popular under saddle in recent years.

While Germany boasts many different warmblood and coldblood breeds, they have also produced a few pony breeds as well.

The German Riding Pony is a “miniature warmblood,” which means that it looks similar to other German warmbloods in type and temperament – just in a smaller package.

German Riding Ponies appeared in the 1960s by crossing Welsh ponies, Arabians, Anglo-Arabs, and Thoroughbreds. The idea was to create a smaller version of a German warmblood, one that would be competitive at equine sports, but small and reasonable enough for children to handle.

German Riding Ponies are subject to inspections like other German warmblood breeds. They may sometimes be crossed with Welsh ponies or Arabians, but the studbook maintains their own bloodlines and they have a distinct type.

German Riding Ponies usually stand 13.2 to 14.2 hands tall, and they have a phenotype that is more “horse-like” than a pony. These ponies are most often used for junior competitions in dressage, showjumping, and eventing.

The only native pony to Germany, these ponies have been roaming the countryside of Westphalia since the 14th century. They are small, standing at about 12 to 13 hands, and still have some of the characteristics of their primitive ancestors (such as a predominantly dun-colored coat).

One wild herd remains, and they are generally left to their own devices until the yearly roundup. The foals are sold, and may become domestic children’s ponies, trained to drive, or used to work the land. 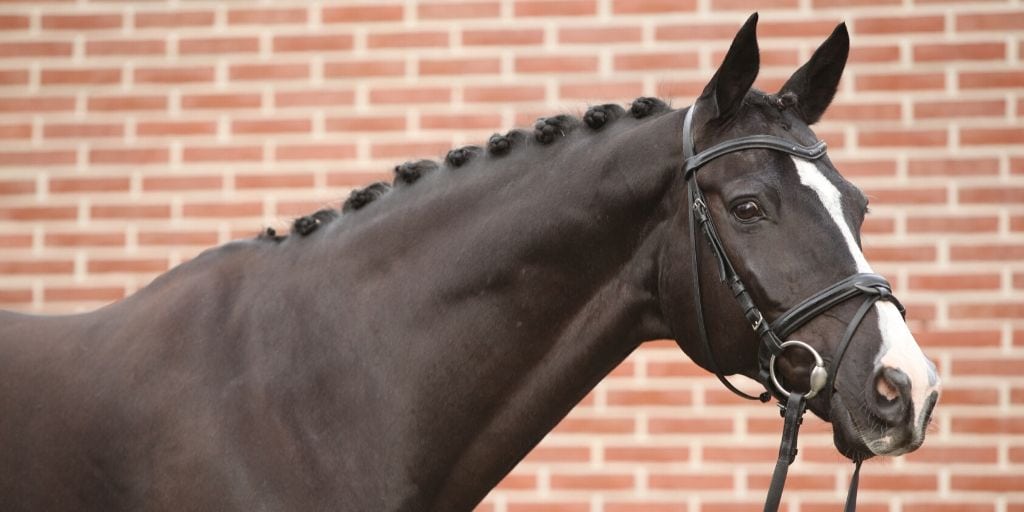 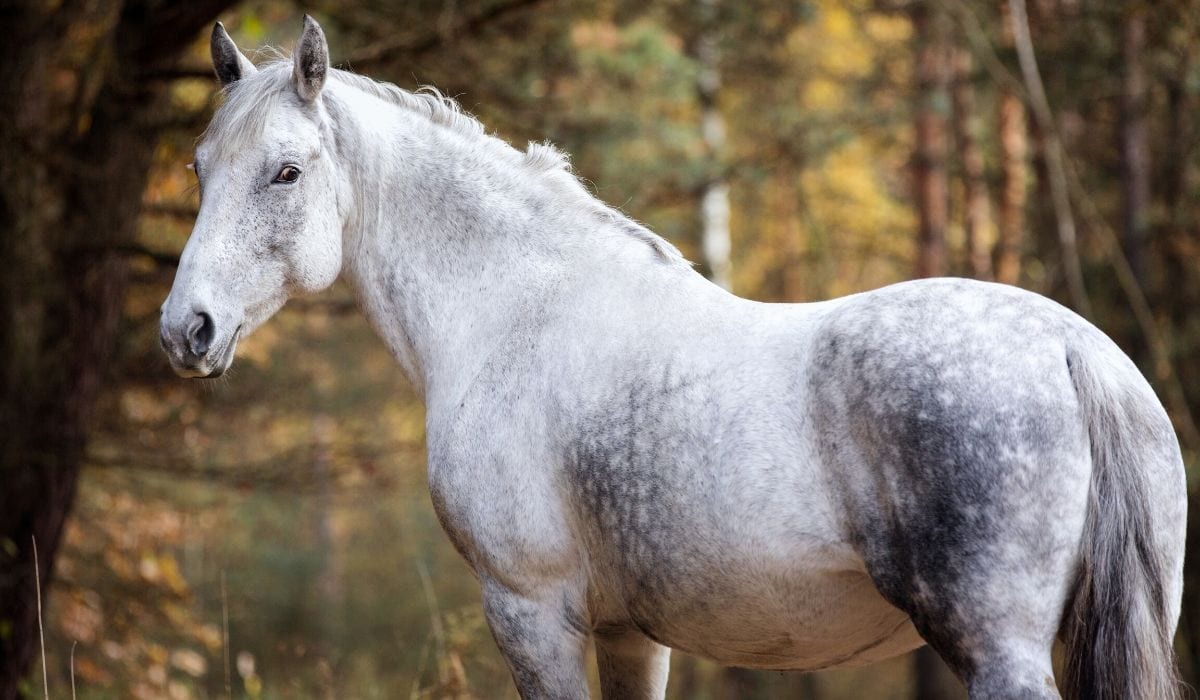