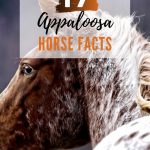 The Appaloosa is one of the oldest American breeds – it was developed by the indigenous Nez Perce people. These horses are characterized by a distinctive spotted coat, but there’s much more to the “Appy” than just their unique markings. Here are 19 things you might not know about the rugged Appaloosa horse.

1. The Appaloosa Is a Horse of Many Different Colors

While many breed standards discourage unique or uncommon coat colors, the Appaloosa Club encourages them. These colors and markings are accepted in any combination in the ApHC registry.

A horse may have virtually any base coat color (black, brown, chestnut, bay, palomino, etc). They may also have any combination of facial markings (star, blaze, stripe, etc) or marks on their legs. There are several ways to describe various coat patterns, but these are not exclusive. Appaloosas are as unique as snowflakes!

No, they don’t actually think that they’re leopards. An Appaloosa’s distinct spotted coat is produced by a gene called the “leopard-complex”:

“Any horse that displays Appaloosa core characteristics – such as the distinctive coat patterns, the mottled skin, the striped hooves, and the visible white sclera – is a carrier of at least one allele of the dominant leopard-complex (LP) gene.”

This gene is expressed in many different ways, and horses without the unique spots can still be carriers of the gene and produce speckled offspring. Anecdotally, the more intense the coat pattern is, the more likely the horse is to produce a foal with visible spots.

Appaloosas are known for their hardiness and overall good health, but their quirky coat patterns come with the risk of specific genetic diseases. The leopard-complex gene is linked to two specific eye diseases.

A rugged breed, a healthy Appaloosa can live 25 to 30 years or more!

4. Not All Spotted Horses Are Appaloosas

Some miniature horses, ponies, or draft horses may have spotted coats, possibly indicating an Appaloosa ancestor somewhere in the bloodlines.

Horses with a “Dapple gray” coat pattern (Lipizzaners, Thoroughbreds, Andalusians, Welsh ponies, etc.) may appear to have spots, but they lack the other defining Appaloosa characteristics.

5. Not All Appaloosas Have Spots

To be accepted into the ApHC registry, a solid colored Appaloosa needs to have the other identifying characteristics: striped hooves, mottled skin, and white sclera. It may undergo further DNA testing to prove its lineage.

Solid coats are not as desirable as the traditional spotted patterns, and solid-colored offspring of two registered Appaloosas are accepted into the registry as a “non-characteristic” Appaloosa horse.

6. Their Coat Is Prehistoric!

Prehistoric horses roamed the earth during the stone age. In France, spotted horses appeared in cave paintings more than 25,000 years ago. (source)

Thought at first to be depictions of fantastical beasts, researchers now believe the paintings represented reality; the mutation for a leopard-spotted coat was found in several fossils of ancient horses.

7. They Have Many Names

Appaloosas are from an area in northern Idaho, Washington, and Oregon called the Palouse. Originally dubbed “a Palouse” horse, historical texts have also referred to them as “Palousey,” “Appalousey,” “Appaloos,” and “Appalucy” horses. Enthusiasts and lovers of the breed refer to them by their nickname: “Appys.”

8. They Were Cherished by the Nez Perce People

Spanish conquistadors brought horses to central America in the 1500s. Originally a fishing people, the Nez Perce acquired their first horses in the early 1700s and began breeding them. This was life-changing – their culture shifted away from fishing and they became skilled mounted hunters and excellent equestrians.

“Their horses appear to be of an excellent race; they are lofty, eligantly [sic] formed, active and durable…some of these horses are pided with large spots of white irregularly scattered and intermixed with black, brown, bey [sic] or some other dark color.”

Now, the Nez Perce people breed Appaloosas with Akhal-Tekes to create the Nez Perce horse: a fast, agile range horse with good endurance and stamina. These horses more closely resemble the “foundation Appaloosas” of the past.

9. The US Government Almost Destroyed the Breed

During the Nez Perce war of 1877, almost 2,000 Appaloosas were killed by US troops, and the remaining horses were euthanized, sold or scattered throughout the plains. Thankfully, the Appaloosa Horse Club is dedicated to preserving the heritage of this distinct breed. They boast over 700,000 registered Appaloosas since their foundation in 1938.

Appaloosas were bred for versatility. Breeders needed tough, docile horses that could carry riders and supplies across hundreds of miles of wilderness. But, they also needed a horse that was swift and agile enough to hunt roaming bison.

Today’s Appaloosas are just as versatile, participating in many different equestrian activities in both Western and English disciplines:

11. They’ve Even Got Some Breed-Specific Events of Their Own!

There are five sanctioned games classes for Appaloosa shows in the ApHC handbook. Two are specific to Appaloosas, and based on traditional equestrian games played by the Nez Perce people:

Because the Appaloosa is so often crossed with other breeds to maintain their trademark versatility, physical body types vary widely. The earliest Appaloosas were range horses: leggy, thick-necked with scraggly manes and tails. They weren’t bred for aesthetics – they were workhorses.

Today’s Appaloosas are also bred for purpose, which means they come in many different sizes. Generally, an Appaloosa will be 14-16.5 hands (no ponies or drafts are allowed in the registry) and fall somewhere between 900 and 1200 pounds.

13. They Can Have an Appy Attitude

Appaloosas are known for their good temperaments: these horses are calm, intelligent and gentle. But, they require loyalty and trust – if you win an Appy’s heart, you’ll have a friend for life. If you mistreat one, good luck getting him to do what you want.

Every horse is an individual, but Appaloosas sometimes get a bad reputation for having an “Appy attitude”: stubborn, bullheaded, and pushy.

But generally speaking, they’re willing, confident, and friendly horses that are suitable for beginners and professionals alike. Just treat them with respect and don’t break their trust!

With such distinctive markings, these horses are easily spotted in television and movies. A speckled horse actor in a classic western tale is likely an Appaloosa. Here are some famous Appy appearances:

They don’t just appear in gymkhana games – you can find them in video games too!

The 1966 Disney film “Run Appaloosa Run!” featured an Appaloosa stallion called “Holy Smoke.” The short featurette was part of Disney’s made-for-tv movie series “The Wonderful World of Color,” which aired from 1961 to 1966. It’s no wonder they chose the Appaloosa – the breed is well known for its colorful coat!

Osceola, a member of the Seminole tribe, rides his trusty his horse Renegade down the center of the field and throws a flaming spear to initiate FSU home football games. Renegade first appeared in 1978, and six different horses have played the part since then.

Riders are students who must maintain a good GPA and undergo a 2-year apprenticeship for the privilege of playing Osceola.

The Appaloosa is the state horse of Idaho. This honor was signed into law in 1975, and Idaho residents can get license plates featuring the Appaloosa’s stately image.

“And they bred a strain of horses, the treasure of the tribe

Who could haul the hunter’s burden, turn a buffalo stampede

Whether you’re drawn to the Appaloosa’s unique coat patterns, or you’re intrigued by their deep American history, the Appaloosa is a breed with bravery, heart, and it can make a wonderful companion for life.