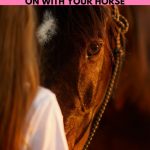 Horses have unique characteristics that set them apart from most farm animals. It is these captivating traits that make us love and admire them so much, but there is one thing that you need to know about your horse. Just knowing this fact can the difference between life and death for your equine partner. Horses cannot throw up.

It is a physical impossibility for horses to throw up their food. Their digestive system is designed in a way that makes them unable to vomit, for any reason. Many new horse owners are unaware of this fact and they may fail to recognize the important signs of choking and other issues as a result.

It is crucial that you understand that a horse cannot throw up, no matter what your friend said that their cousin’s sister’s brother said. Ask any vet, they will tell you the same thing. If you understand and accept this as truth, you can protect your horse from many dangerous situations.

Why Can’t Horses Throw Up?

We as humans are able to throw up our stomach contents because the valve that closes the entrance of our stomach can be released and opened through a series of involuntary actions within our body. A horse has a food intake system that does not allow this valve in their body to open.

When a horse eats, the opening valve is relaxed and allows the food to enter their stomach. If there is any pressure from the stomach, like gas or a bunch of food, it pushes the valve tightly closed to prevent that food from coming out. Almost the way that our bodies involuntarily open the valve, their bodies involuntarily close it so tight that nothing can escape.

This may seem like a complete system failure, but it is actually an ingenious design at work. When horses run, they move in a way that puts a tremendous amount of pressure on their stomachs. In most animals, this would result in vomiting, however, the valve design ‘flaw’ prevents that from happening to horses.

They can run as much as they want and never throw up their food. It is also thought that this ‘flaw’ stops them from throwing up food while they graze for hours with their heads down at ground level.

Why Can This Be Dangerous?

Many other animals have the ability to throw up because it is a useful defense mechanism. If they ingest a food that is toxic or causes severe gastric upset, they can easily release the threat from their stomachs by throwing up.

Horses are unable to do this and if they ingest something that causes extreme gas or is poisonous, they cannot expel it by vomiting. The toxin will remain inside their bodies wreaking havoc. This is why it is important to keep horses away from toxic plants and away from open containers of grain or other feed.

If your horse were to escape an enclosure and get into a barrel of grain, for example, they would eat too much grain at one time. Since they can’t throw up, the food will have to work through their bodies. This could result in impaction or colic since they did not eat enough fiber with their grain.

Colic is a life threatening gastric discomfort in horses that can result in blockages and gut twisting. This can be fatal for horses. If a toxic plant is ingested, since the horse is unable to throw it up, they will suffer the ill effects, including possible death.

Can I Give My Horse Something to Make It Throw Up?

You should never, under any circumstances, give your horse something that is meant to make them throw up. Medicines like ipecac syrup will cause a horse to experience severe stomach spasms and could even lead to death.

If you suspect your horse has ingested a toxin or a large amount of food, you should call your vet immediately. There is nothing that you can do or give your horse to make them throw up.

What If My Horse Has Foam Coming out of Its Mouth?

If your horse appears to be throwing up, it is more than likely choking on its food. For example, your horse may appear to gag, cough and expel chunks of food. While it may look like your horse just threw up, it may actually be choking on some of the food it just expelled.

A horse can easily choke if it eats too quickly, especially if the food is dry. If your horse is choking, you may also notice froth or foam coming from its mouth. A choking horse will not look the same as a human that is choking. They may even be breathing just fine, however, you may notice that your horse did not finish the food that it normally eats.

A choking horse may appear depressed, weak and it may also be drooling. Chronic coughing or acting panicked, such as pawing and repeatedly stretching out its neck, are also signs of a choking horse. You can feel along your horse’s neck for any bulges that shouldn’t be there. This could be the food that is stuck in its esophagus.

If you ever think that your horse is choking, you should remove all the food from its reach and immediately call a vet. Try to keep the horse calm until a vet can clear the obstruction from its throat.

Here is an example of a horse that is choking. If your horse is experiencing symptoms like this you should call your vet right away:

What If There Is Mucous Coming out of My Horse’s Nose?

If you see mucus or some other type of liquid coming from your horse’s nose, it could be a few different things. Your horse could simply be suffering from a respiratory infection. If the mucous is yellow and your horse has a bad cough combined with jaw swelling, it may be suffering from strangles.

If you horse has recently suffered from a bad choking incident, it could be experiencing pneumonia from inhaled particles. In any event, you should always consult a vet if you notice an unusual discharge coming from your horse’s nose. It is always better to be safe than sorry when it comes to horses.

My Horse Sounds Like It Is Belching, Is That Even Possible?

The same valve the prevents vomiting also prevents a horse from belching (burping). Your horse may simply be sucking in air and releasing it. Wind sucking can cause a horse to ‘belch’ back out the air that they have inhaled.

Horses that are prone to cribbing, which is chewing on wood or other surfaces, can release a sound that resembles burping. There are extremely rare instances where a horse may have a glitch in its digestive design that could possibly allow it to burp. For some reason or another, the valve that closes the stomach opens slightly and allows the release of gas. This is not typical and more than likely the horse is simply releasing the air that they have sucked in.

A horse’s body is intricately designed to perform amazing feats of stamina. Inevitably, there are some minor details that may cause some issues, like the inability to throw up. The trick is to be aware of this fact, understand it completely and always be on the lookout for signs of distress. Your horse will let you know when something is wrong but it is up to you to get them veterinary help when they need it.