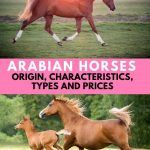 Recognized as one of the oldest and most influential of all horse breeds, most modern horses alive today have an Arabian ancestor somewhere in their DNA. Beautiful, elegant, versatile, swift, and enduring in more ways than one, the Arabian horse is truly special.

Origin of the Arabian

The exact origins of the Arabian horse are still shrouded in mystery. (source) Named for the Arabian peninsula in the Middle East, the Arabian horse was refined by the migratory Bedouin people over thousands of years. Bred to be swift, loyal, and elegant, these horses influenced nearly all of the breeds of horses that we have today.

The Bedouin tribes began selectively breeding horses in arid desert conditions around 5,000 years ago. Only the strongest horses could adapt to such an extreme climate – the result? A prized equine companion with an elegant and refined appearance, large lung capacity, and a strong, compact body. These horses could swiftly carry riders over thousands of miles of desert, and they are still known for that lasting endurance today.

The Bedouin tribes maintained pure bloodlines by meticulously passing down breeding records orally through generations, and by naming their horses with suffixes of “son” and “daughter”. Mixing bloodlines with other desert breeds was forbidden – Arabians were to remain “asil” (pure).

To protect their horses from harsh weather or rogue thieves, tribesmen would bring their horses into their tents with them. While fostering such a close relationship with their people, Arabians developed a good sense and friendly nature – traits that still exist in modern-day specimens of the breed.

Horses were selectively bred into five distinct families, each with distinguishing characteristics.(source) Legend says that Muhammed, the great prophet of Islam, tested his horses to find the most loyal and swift, and the results were five mares of these foundation types:

Horse enthusiasts and breeders have always specialized their horses for versatility, a practice that continues to this day.

There are several different sub-types of modern Arabians:

As chivalry gained traction in Europe in the middle ages, the Middle East had its own version: furusiyya. Furusiyya is “the historical Arabic term for equestrian martial exercise” in the 10th-15th centuries. (source) A scientific discipline, practitioners of furusiyya focused on three categories: horsemanship (veterinary practices, riding, horse care), archery, and “charging with the lance”.

Arabians made excellent war horses. The Bedouins would select their most loyal and efficient mares for raiding parties, and sneak into enemy camps. Mares were prized over stallions because of their talent for silence – mares don’t give away a soldier’s position.

In the 7th century, the Muslim prophet Mohammed was “instrumental in spreading the Arabian’s influence around the world:” (source)

“He instructed his followers to look after Arabians and treat them with kindness. He said that special attentions should be paid to the mares because they insure (sic) the continuity of the breed. He also proclaimed that Allah had created the Arabian, and that those who treated the horse well would be rewarded in the afterlife.”

As Islam spread, Arabians were used in the fulfillment of the jihad (the struggle against enemies of Islam), and these horses were woven into the fabric of the culture. The purebred Arabian was prized –regarded as a gift from Allah.

Arabians Across the Globe

The Darley Arabian, Byerley Turk, and Godolphin Arabian became the foundation stallions for the thoroughbred breed – 93% of Thoroughbreds can trace their lineage back to these three horses.

In America, George Washington bred his Arabian to improve his cavalry mounts. In 1893, Arabians appeared at the Chicago World Fair, and interest in the breed grew from there!

Arabian blood is almost always used to refine other breeds, and there are some recognized crossbreeds with their own registries:

Some other popular crossbreeds include:

Morab: A Morgan and Arabian crossbreed.

Pintabian: An Arabian crossed with a paint horse, resulting in a horse with 99% Arabian and tobiano coloring.

Arabian bloodlines are also used to improve many other established breeds, especially for performance – such as the Trakhener.

Arabians are lean, strong, well-bred machines. Designed for endurance as raiding horses in the harsh conditions of the Saudi Arabian desert, these horses have been categorically refined over thousands of years of selective breeding. The result is a horse that exudes grace and commands attention wherever he goes:

“The purebred Arabian horse is striking. An Arabian’s most identifiable characteristics are its finely chiseled head, dished face, long arching neck and high tail carriage. Its entire appearance exudes energy, intelligence, courage and nobility. Every time an Arabian moves in its famous “floating trot,” he announces to the world his proud, graceful nature.”

Originally used as war horses rather than pack animals, Arabians developed several characteristics that set them apart from other horses.

The Arabian is a relatively small horse, standing between 14.1 and 15.2 hands tall. They are considered horses, rather than ponies, even if they measure shorter than the standard cutoff of 14.2 hands.

The Arabian horse generally weighs between 800 and 1000 pounds. Smaller horses consume fewer resources, which is essential for survival in a harsh desert climate. They also have dense bones, which enables them to carry heavier loads than other light horses.

Arabians can come in any color, but to be registered they must be bay, gray, chestnut, or roan (sabino or rabicano, not “true roan”).

Sometimes, an Arabian in a rare color will appear:

Registered purebred Arabians can never carry the “dilution” color genes such as dun, cremello, palomino, bucksin, pinto, or the leopard-complex gene (this is responsible for Appaloosa spotting).

To the Bedouins, palomino horses were considered bad luck, and spotted horses looked like livestock. Black horses would also not have fared well in the desert climate, for they would have become overheated easily.  These characteristics were usually bred out, but they occasionally appear in modern Arabians today.

These horses were bred to be loyal, intelligent, and friendly. As a “hotblooded” horse, they may be a bit more spirited than other breeds, but children may show stallions in-hand during competitions – this is unusual, since stallions are known to be more temperamental or unpredictable.

Arabians have good temperaments, good “horse sense”, and trust easily. They make excellent family horses, and they would be suitable for a beginner with the right training and supervision.

Arabians were exceptionally valuable to the Bedouins. A good mare used for war was priceless – she would never be sold, but only given as a precious gift. It is believed that these horses were mostly used for riding, since camels and donkeys were the common beasts of burden at the time.

Only the highest quality stallions were kept by the tribes; a horse had to prove its value, and mares were better suited for raiding parties.

During the “Arabian craze” of the second half of the 20th century, wealthy people were drawn to the elegance and beauty of Arabians just as kings and sultans were drawn to them thousands of years ago.

Some of the most expensive Arabians sold for millions of dollars!

There are still Arabian horses in the Middle East that fetch hundreds of thousands or millions of dollars, but your average American Arabian sells for around $5,000. This is an affordable price point, especially for those looking for a pleasure mount or casual riding companion.

Arabians are the undisputed champions of endurance riding. Built for speed and stamina, these horses can cover 25, 50, or 100 miles of difficult mountain terrain in a single day. In their desert homeland of Qatar, Arabians compete in timed races – covering 75 miles in just 8 hours! Thousands of years of selective breeding have given the Arabian the tools it needs to succeed: large nostrils and chests, well-proportioned frames, and a competitive spirit.

These versatile horses also participate in many other competitive events, in both Western and English disciplines including:

While Thoroughbreds are the dominant racing breed in the US, Arabian racing is popular in Egypt, Poland, and Russia. Many horses are raced on the track to get a gauge of the horse’s speed and competitive nature, but are quickly exported for other disciplines. Horses that are retired from racing can lead fulfilling lives afterward as endurance, performance, or pleasure mounts.

Is an Arabian the horse breed for you?

Arabians have unparalleled grace, beauty, and athleticism. Their versatility and exceptional pedigrees make them a favorite horse breed throughout the world. If you’re looking for a spunky, intelligent, and swift little horse for your next mount, consider an Arabian!