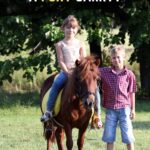 Since the domestication of the horse, equestrians have debated how much weight their horse or pony can safely carry. If you’re wondering how much weight your pony can carry? A pony can typically carry between 10-20% of its body weight. This depends on a variety of factors including the ponies soundness, level of fitness and the amount of work required.

Keep reading to dig a little deeper into this perplexing problem.

Many equestrians follow the 20% rule of thumb. They believe that a horse or pony can safely carry up to 20% of his body weight.

This figure is somewhat backed by historical evidence – old US army specifications dictate that “American mules can carry up to 20 percent of their body weight (150 to 300 pounds) for 15 to 20 miles per day in mountains” (source).

A mule (which is a particularly strong cross between a horse and a donkey) is often used as a pack animal, and is well-suited for carrying heavy loads. But what about ponies?

Ponies are Strong for Their Size

A pony’s breed, workload, fitness level, and temperament will all determine how much weight he can safely carry.

For example, a slender hunter pony may routinely carry lighter loads than a stocky working pack pony in the mountains.

Many pony breeds developed in mountainous regions, carrying heavy loads of goods up and down steep trails.

How Much Weight Can a Pony Carry? It’s Math!

Horses and ponies range in size and weight, just like people. On average, a pony between 9 and 14 hands may weigh between 400 and 800 pounds.

Following the 20% rule, this means that a pony can generally carry a person (including tack) who weighs between 80 and 160 pounds. This is why ponies are usually ridden by children, or smaller adults.

An exceptionally tall and stocky pony that weighs 1,000 pounds or more could probably handle a 200-pound load, but most ponies fall below this threshold.

The Science of Weight

Horses and ponies were first domesticated to be useful beasts of burden, transporting people and goods on their backs for hundreds of miles.

Scientific studies have shown that added weight puts stress not only on a pony’s back, but on the rest of his joints as well. The heavier the load, the higher the stress – and the higher the likelihood of injury. (source)

Imagine if you suddenly decided to go backpacking, with no training or preparation. Throwing a heavy backpack on your back and climbing miles of steep trails would probably result in some soreness or injury, no matter what your fitness level. The same is true for ponies.

A pony of any breed who is in poor condition will not be able to carry the same amount of weight as a stocky pony with a high level of fitness for the task.

You should always make sure your pony is sound and ready for work, and build him up gradually for the tasks he’s being asked to do. After all, you wouldn’t try to lift heavy weights in the gym without training first, would you?

There’s a reason that Thoroughbred jockeys weigh so little, and why children serve as jockeys for the Shetland Grand National. The smaller the rider, the more likely it is that the pony can perform at peak levels.

In fact, one British study suggests that riders who weigh more than 15% of their horse’s weight could be causing serious damage to the horse’s joints. (source)

However, most equestrians are not seeking to become national champions in their chosen sport. While riders should be mindful of their size, the size of their mount, and the activities they’re asking him to do, a rider’s weight is only one factor to consider.

A pony’s welfare should always be paramount. Riders should be smart, exercise caution, and not overload their ponies. Once a child has outgrown his beloved steed, it’s time to find him a horse who can carry him.

A pony is technically classified as a small horse that stands below 14.2 hands high at the withers.

A heavy draft-cross pony may be capable of carrying more weight than a slender Thoroughbred or Arabian cross, but some breeds are known for being exceptionally strong for their size:

Small horses or large ponies may be capable of carrying a larger person, but it depends on the kind of work they’re being asked to do. Plenty of strong ponies could handle an occasional trail ride at a slow speed or short rides around a flat arena.

Heavier riders who wish to ride their horses regularly, or participate in more strenuous events (such as show jumping or eventing) should consider a heavier mount.

Many riding programs (especially tourist-based trail riding programs) have weight limits of around 200 – 250 pounds, for the safety of their riders and their horses. However, these are generally full-sized horses or mules that are used to carrying heavier loads.

Theoretically, a strong and stocky pony that reaches over 1,000 pounds should be able to carry a 200-pound person – but remember, that’s also including tack or any extra baggage as well.

The United States Pony Club has specific rider weight limits for their mounted games – a rider may not weigh more than 18% of their pony’s approximate weight. However, these ponies are often horse-sized and capable of carrying small adults.

The Polocrosse games have similar weight requirements. The following weight limitations apply to riders dressed and ready to ride:

Limits around the world

In Iceland, small Icelandic horses were limited to 100kg (or 220 pounds). However, this guideline was for pack animals that moved heavy loads at a walk.

Many modern studies have indicated that any load heavier than 30% of the animal’s body weight is likely detrimental in the long run.

How much can a pony pull?

Many adult pony-enthusiasts prefer to drive their ponies instead. Because ponies are generally strong for their size, many were bred specifically for this purpose. Shetland ponies were bred to pull heavy coal carts in coal mines with low ceilings, and they make excellent driving ponies.

If you’re interested in driving your pony, consider the following pony breeds (source):

While there is no hard and fast rule about how much weight a pony should carry, equestrians should use their heads. If a pony is cheerful, willing, and sound after a long day of carrying a heavier load, then he may be suited for the work.

If a heavier rider is balanced and carries their weight well while they’re in the saddle, many ponies can handle it just fine.

However, it’s important to be objective – and know when to lighten the load for your pony. Many riding ponies can still have wonderful careers as driving ponies, children’s lesson ponies, or trick ponies! As always, consider the needs of your pony carefully, and consult your veterinarian if you’re unsure.