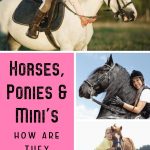 When it comes to different types of equines, many times they all get lumped into one group: “horses.” In other words, “horses”, “small horses” and “baby horses” when in actuality what people are talking about are three distinct animals. Namely, horses, ponies and mini horses.

What is the difference between horses and ponies? While ponies and horses are technically the same species, ponies are different from horses in height and size. Any horse under 14.2 hands but taller than 38″ is technically a pony. There are also some temperamental, internal and aesthetic differences.

When you are trying to tell the difference between a horse, a pony and a mini horse, you need to take into account their full grown height. If the horse in question is still a baby, you can try to guess the adult height by looking at mom. Here is a breakdown of the heights for each equine classification:

Miniature horses differ by being very much smaller than even ponies. Further, while ponies tend to look stockier and a bit different from full-size horses, minis are bred to be miniature versions of horses in terms of looks and proportions, just on a smaller scale.

The differences in appearance, sizing and internal workings, though not as drastic as across differing species, are still quite important. Each defining set of characteristics truly sets horses apart from ponies apart from mini horses.

What is the Difference Between a Horse and a Pony?

Let’s start with the basics: ponies are not “baby horses” or “teenage horses” or “childhorses” at that adorable small size. That’s their full height. They are never going to grow bigger in “full horses”.

If you are looking for the word to describe a baby horse, that is a foal, regardless of what size they will be as an adult. In fact, there are several different terms used to describe horse gender which I have covered in detail in this post if you are interested.

Looking at size, ponies are not only considered to be smaller than horses, there are maximum height requirements they must be at or under. The cutoff for a pony is 14.2 hands. Anything taller, even by a little bit, does not qualify.

In the English disciplines, this becomes extremely important because of specialized pony classes. Well behaved ponies that remain short enough to compete in these classes can fetch top dollar.

There also may be some variations is height maximums between show rings and disciplines, but expect them to be generally the same.

Along with the smaller stature comes other physical differences as well. While ponies do overall look like smaller horses, their bodies and physical characteristics are stockier than horses. Think more rounded barrel chests, shorter but thicker legs, a stronger and shorter neck, coarser mane and tail and an all around heartier physicality.

The varying conformations are expressed through both bone and muscle structure. Further, the thicker coats and manes of ponies were developed over time to better protect their small bodies from the cold. (source)

There are also quite noticeable differences in temperament. If you have ever heard of the term Napoleon complex in reference to someone of something who i short having a bigger, overcompensating personality. That very often applies to ponies, too.

While horses generally are thought to be pretty cooperative (the bigger the friendlier, too, with draft horses such as the Clydesdale even being referred to as ‘gentle giants’) ponies are often little spitfires. They are clever and generally less quiet tempered than larger horses.

When it comes to  intestinal workings, ponies differ from horses in the ease of their digestion. You may often hear the ponies are “easy keepers”, which means they generally require less food and maintain weight with less fluctuations.

The downside? Overfeeding is much easier to do on accident than with horses, making them that much more susceptible to foundering and developing laminitis.

It is important to not overfeed your pony. Portions should be weighed if possible and adjusted to fit your ponies metabolism. Close monitoring of his body condition should be done to ensure that your pony does not slowly become obese over time.

When it comes to pasture grazing, caution should be exercised. A pony can shockingly founder in under an hour if they are turned lose suddenly onto a lush pasture.

All that green grass? They get excited and eat too much too quickly, to their own possible detriment. The perfect pasture for a pony will be one that requires more work to graze, compared to the ideal environment for a horse.

These shorter, stockier, more stubborn little cuties may look like and act like bigger horses, but only to a certain degree. In size, shape, personality and feeding patterns, ponies are very much their own animal.

What is the Difference Between Mini Horses and Ponies?

If ponies are similar to horses only shorter, what sets mini horses apart from ponies? Though they are smaller than a regular horse, miniature horses are also much smaller than a pony.

Miniature horses are much more similar in appearance to horses: they have been bred to have the same features and proportions, just scaled down.

Think like someone took a shrink ray to a regular horse, with minor variations in conformation. Because of this, their appearances are a little different. Their skeletal systems much more closely mirror that of a larger horse’s and so they will not have quite the same rounded, stocky proportions of a pony.

Miniature horses have historical roots tracing back to the 1600’s that document them being trained and selectively bred for temperament. You will find miniature horses to be friendly, even-tempered and easy-going – a generalized opposite personality than that of a pony.

Mini horses are also different in terms of what they can be used for. Ponies, while small, are still large enough and sturdy enough to be ridden. Miniature horses, on the other hand, are simply too small to be safely ridden by anyone over 70 pounds (check out my article on riding mini horses for more info). However, they are ideal for a number of other disciplines such as driving, that ponies are less inclined to take to.

When compared to ponies, minis are typically slimmer, smaller and more docile. While we tend to think of ponies as smaller versions of full size horses, it is actually the mini that can really be thought of that way.

Keep in mind that, like ponies, miniatures are also often overfed. They are so small compared to their equine counterparts, that they can consume too much and become obese very quickly. Most miniature horses should be fed strict diets and exercised regularly to maintain good weight.

What is the Difference Between a Mini Horse and a Full Size Horse?

Horses are classified as standing above 14.2 hands (with some drafts even reaching past the 18 hand mark) whereas minis max out at 38 inches (or 34 inches).

When it comes down to the differences in a regular horse and a mini horse, the major factor is the obvious one: size.

Outside of height and carrying capacity, however, mini horses are not too far off from their larger horsie cousins.

How are Horses, Ponies and Mini Horses Alike?

Of course, despite their differences, there are many commonalities between the three.

Firstly, they are all members of the equine family and are all pretty much types of horses. Though varying in amounts needed, their diets are mostly the same: grass, hay and sweet feed are the staple diets across the board.

While horses, ponies and miniature horses vary mostly in size, they all have the same general looks and their colorings and markings do not widely vary. For instance, you could just as easily see a bay miniature as you could a bay pony or a bay horse.

All three have also been bred by and evolved with humans to have a friendly working relationship. Despite a pony’s stubborn tendencies, they are still highly trainable. All three animals can do roughly the same type of work, all three animals bond with each other and all three are perfectly adorable human companions.

Despite their general similarities, it is important to remember that mini horses, ponies and horses are not all the same. There are some small (and some larger) details that vary between them, though, in the end, they are three equines in the same family.

If you enjoyed this article, you may like these as well: