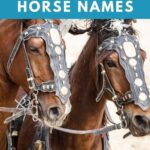 Many people, when they think of a horse, think of strength and power. They are the animal upon whose backs many nations rose to power over the centuries.

The horse is so strong and powerful, when the motor was invented they use “horsepower” as the term for the measure of its strength. These strong horse names are great for when you want people to remember the powerful effect they had on history.

We can also look to history, both famous horses and famous people throughout the ages that have become synonymous with those terms as well. Let’s get started!

The greek god Apollo had four horses he would utilize to pull the sun across the sky. As you can imagine, the Ancient Greeks knew that moving the sun was no easy feat. In order to do so, Apollo had to rely on the strength and power of his four steeds. They were names:

Speaking of strength, power, and mythology. A perfectly powerful horse name can be one derived from ancient times. Let’s have a look at some good ones.

Let’s first have a look at strong female horse names.

Next up, strong male horse names.

It seems that most of the time when we think of strong names, they feel more masculine. That isn’t always the case though. These horse names are perfect for the powerful mare in your herd.

When I think of names for strong and powerful geldings and stallions, the first thing that comes to mind are warriors and royalty. Whether originating from fact or fiction. Here are some good ideas along those lines.

To finish up the list of names, here are a few that mean big or strong.

Whether you or looking for a strong horse name or a powerful horse name, or perhaps one that fits the bill for both traits, remember that there are a variety of different ways to decide.

The name doesn’t have to be famous or historical. It can be the name of the kid from Elementary school that had the strength to stand up to bullies, a teacher that helped you with your homework or the friend with the resolve to fight through a difficult time.

Strength is something that doesn’t have to be physical. It can be mental or emotional as well. Be sure to keep that in mind when choosing a strong and powerful name!