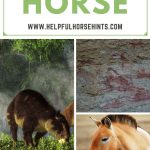 Horses are remarkable creatures that have an uncanny ability to captivate our hearts, but do you know where exactly horses come from? Did you know that the horses we know and love today are not the same horses that lived in North America millions of years ago?

The first documented wild ‘horse’ stood only a foot tall and looked more like a dog than a horse. Over time it evolved into the beloved modern horse of today. At one time, the horse species was completely extinct in North America, but thankfully horses were brought back to our continent, completely domesticated.

Knowing the complex history of horses and where they originated can help you to truly appreciate and understand their unique place in this world. Horse predecessors lived long before humans ever did and their existence dates back over 50 millions years ago. Much of the information out there is confusing and difficult to follow. The information in this article should help paint a clearer portrait of the horse’s history.

Evolution Breakdown of the Horse

Millions of years ago, ‘horses’ of various shapes and sizes roamed our continent. The domesticated horse that lives today is only a small fragment of what once existed.

At one time, there was a large branch of the equine family that unfortunately no longer exists in the world today. About 55 million years ago, a small predecessor of the horse family known as the hyracotherium or eohippus lived in the forests of North America.

These first species of ‘horses’ were small and resembled dogs more than they did modern-day horses. They had 4 toes instead of hooves and stood about 1 foot tall at their shoulder.

Eohippus ate leaves more often than they ate grass and they hid in the trees of the forest instead of grazing on open fields.  Their small size and lack of speed, when compared to modern-day horses, made them easy prey for some predators, hence the hiding.  (source)

Over time, with changes in the climate and available forages to graze upon, the horse species started to evolve and, over time, more horse-like creatures began to pop up.

Around 34 million years ago, the Mesohippus horse roamed North America. It stood slightly taller than its predecessor at about 2 feet at the shoulder and it had only 3 toes instead of 4.

Its longer legs made this version of the horse faster than the eohippus and it could cover more area when foraging. It was considered prey to many predatory animals and but its increased speed gave it the ability to survive and evolve. (source)

About 17 million years ago, the horse evolved into the Merychippus, meaning “ruminant horse” in Greek. It lived among the plains of North America and stood around 3 feet high.

Merychippus had a more horse-like head and is the first prehistoric horse to really look like our modern day horses.

The digestive nature of the Merychippus horse is somewhat confusing because of its name. Horses today are not ruminant animals like cattle, where they regurgitate their ‘cud’, but instead horses digest their foods using fermentation.

Paleontologists agree that these Merychippus horses more than likely were not ruminant creatures either and also used the fermentation method of digestion.

Their jaws were more developed and similar to the jaws of modern horses to account for the increased need for grass grinding. Their bodies evolved to increase their speed, making them more likely to continue escaping the clutches of predators.

Technically, these animals had 3 toes, but the middle one ended in a hoof and supported the majority of their weight. (source)

Standing about 5 feet high, the hipparion closely resembled the Merychippus. It had a single toe that ended in a hoof. It supported all of its weight on this toe.

Hipparion technically had 3 toes, although the two on the sides were smaller and did not touch the ground at all. This version of the horse lived for almost 22 million years.

Fun Fact: The two “extra” toes can still be seen on some horses today. The ergot and the chestnut on a horse are where these extra appendages were once found. To this day, some horses still grow an abnormally long ergot. In the rare case of a horse with 5 legs,

This animal grazed like modern day horses and relished in the open plains of North America. Their teeth were designed for grazing and unfortunately, they were also prey to numerous emerging predators of the time. (source)

The horses of North America varied in size and the amount of toes their hooves had. The Dinohippus lived over 4 million years ago and most of them had a single-toed hoof. There is some evidence that some of them had 3-toed hooves. They grazed on grass as it was their main source of food. The Dinohippus stood a little over 5 feet tall and is considered a close relative of the modern horse. (source)

The Pliohippus horse stood slightly taller than the Merychippus at a whopping 4 feet at its shoulder.  Its foot technically had 3 toes, although the two on the sides were barely, if at all, visible. The middle toe was far more pronounced and more closely resembled the single-toed hooves of horses today. The exact relation to modern day horses is questioned today, however, its noticeable resemblance to the horses of today cannot be refuted. If not a predecessor of the modern day horse, it is a close cousin.  (source)

Horses continued to evolve and around 2.6 million years ago, various subspecies of horses migrated to Eurasia during a time when our continents were connected by the Bering land bridge.

From there, they moved on to Asia and often made trips back and forth to North America as they continued to evolve. About a million years ago, these undomesticated horses of various sizes roamed North America in big herds.

Unfortunately, a little over 10,000 years ago, those horses that called North America home became extinct due to overhunting and the fact that ice-covered their only food sources.

In fact, they became extinct around much of the world, with, thankfully, some variations existing in Asia. They eventually evolved into the horse we know and love today, the Equus caballus. (source)

Domestication of the Horse

When horses first became extinct in North America over approximately 10,000 years ago, they were undomesticated and considered mainly to be sources of food for humans.

Approximately 5,000 years ago, humans first start to trap and breed horses like cattle to be used for food and milk. During that time, members of certain tribes in Asia began to use the horses as a mode of transportation.

The change in usage of the horse from food source to transportation source created a ripple in the fabric of our future. The ability to travel great distances in a short amount of time greatly changed the way the world communicated and interacted at the time.

The horses that were initially domesticated were not of the same size that we have now. They were more pony-like in stature, but they were still very useful and paved the way for humans to domesticate horses as they became larger in size.

The domestication of the horse gave humans what is considered to be their most important animal ally. Thanks to humans eventually breeding horses for larger sizes, we now have the modern horses we know and love today. (source)

How Did Horses Get to North America?

After their extinction in North America, the modern day horse did not exist here for thousands of years. Thankfully, domesticated horses were brought to our country starting with the Spanish conquest.

Eventually, European colonists brought more horses of different breeds to North America. These horses were bred together and new breeds emerged over time.

What is Przewalski’s horse?

Przewalski’s horse is the last remaining subspecies of today’s horse and is thought to be the last living subspecies that evolved solely on natural selection instead of selective breeding by humans.

It stands around 48 to 56 inches high at the shoulders and weighs up to 750 pounds. They have pale colored bellies and their coats are a beige or reddish-brown. They have white muzzles and a dark colored mane.

In the 1960’s, this species was taken to the brink of extinction due to people breeding it with domesticated horses. It was then removed from the wild for its own protection. Thankfully, it has since been introduced into the wild in Mongolia and rumored to no longer be endangered. (source)

Today, there are tons of wild horses that roam the American West, but keep in mind that these are not actually ‘wild’ animals. They are domesticated horses that are considered feral and have spent their whole lives living free from human constraints.

Horses that were once held on ranches and raised around humans escaped their captivity and became the wild mustangs we know today. Due to the fact that horses became extinct in North America and had to be reintroduced, U.S. governmental agencies do not consider these wild horses as native to our country.

Because of this, ‘wild’ horses often do not get the same protections as wildlife that is native to the United States. While native wildlife is protected, non-native wildlife like wild mustangs are maintained to prevent harmful disturbances to the ecology. (source)

Despite management plans, today about 60,000 ‘wild’ horses roam free in Canada and the U.S. together. Nevada has almost half of the ‘wild’ horses that roam in the United States. (source)

The evolution of horses can be somewhat confusing at times. A lot has happened over the past 50 million years that took horses away from our continent and thankfully brought them back, new and improved. They evolved time and time again to adapt to their surroundings and forge their own path into modern day existence. Horses are remarkable creatures and knowing the path they endured to get here only makes them that much more intriguing.