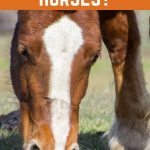 When you picture a horse happily chowing down, what comes to mind? Grass, hay, apples, oats, carrots… We think of horses as happy herbivores, living off of a vegan diet. But you may also have wondered – can horses eat meat, too?

In general, a horse’s digestive system is designed to digest a plant-based it, and for that reason, horses are classified as herbivores. However, there are some outlying cases of when horses have eaten meat.

A carnivore is designed for the hunt. With eyes on the front of their head, they can hone in on prey. They also tend to have a more developed sense of smell. The horse, on the other hand, is designed with a nearly 360-degree field of vision enabling it to easily spot a predator in the distance.

Should meat be a part of their regular diet? No, their internal system just isn’t designed for it. But, in smaller doses, some horses have taken a turn to the more carnivorous.

How Horses’ Digestive Systems Are Designed

You will not usually find a horse going out of its way to naturally eat meat on its own, whether domestic or in the wild. Being natural vegetarians, horses’ eating habits and internal workings are best for eating plants, not meat.

If you take a look at a horse’s stomach, you will note that it and the intestines are large and long. This is because plant matter takes a longer time to digest and break down inside the body, so as to fully allow all the nutrients to be absorbed.

On the other hand, when you compare it to a carnivore’s system, you will see that stomachs designed for eating meat are smaller and the intestines shorter.

For this reason, meat is to be digested faster and expelled from the body faster. Carnivores also have certain type of liver that removes toxins found in varying meats. Horses’ livers lack that important function.

Digestion Starts with the Teeth

Another difference between horses and traditional meat-eaters lies in the teeth. The flat, molar-like teeth of horses are meant for grinding and chewing rather than tearing and ripping, as sharper teeth are in carnivores.

Those pointy canine teeth are found in mammals that are expected to eat meat and horses simply do not have them. Horse mouths contain twelve incisors that are used for cutting plants, twelve premolars and twelve molars, which are used to grind down on traditionally tough stems and leaves.

A small stomach is perfect for animals who graze. They only need to hold a small amount of feed because they consume their forage relatively slowly. The stomach is only the start of the digestion process and, for a horse, is the smallest section of their digestive tract.

Further, horses are unable to vomit. This leads to scary complications if they eat some meat that is bad or indigestible for some reason. Growing grass doesn’t “spoil”. Meat eaters can throw up traditionally, though, so they can expel bad or painful food from the body before it becomes a problem.

Another thing that horses lack is a gall bladder. Because their normal diet of grasses isn’t high in fat, they didn’t evolve to process it. While a horse can acclimate to a higher fat content (up to 20%), they need to be acclimated to this increase. (source)

Let’s take a further look at what a horse’s body needs to sustain. Assuming an average weight of 1,000 pounds for a horse, they need around 13,500 calories a day just to maintain. And if you add in exercising, jumping, etc. that number only increases (to about 16,200). (source)

Pasture grass provides around 266 – 308 calories per pound, so that is why most horses have diets supplemented with grain, dried hay, sweet feed and more. (source)

Most of the horse’s nutrients though are provided by roughage, which also holds a lot of water. Because of this water weight and generally mass, roughage (grasses and hays) take up a lot of room in a horse’s stomach. In fact, fresh pasture grass can be up to 70% water.

As we discussed, a horse’s digestive system is designed to consume food slowly. If a horse’s stomach and digestive are left empty too long, it is liable to cause colic, which can be deadly. (source)

For this reason, horses should always be eating a lot of food that is low in calories rather than physically smaller amounts of food with the same caloric count.

Since horses were designed to keep consuming that forage and roughage, they are not familiar with the feeling of an empty stomach genetically. That gnawing feeling leaves them unsure what to do if not chewing on grass, which can lead them to lip at the ground around them, essentially “fake eating” out of habit and boredom.

This can result in sand colic. If horses don’t turn to sweeping the ground, they may instead pick up other unwanted vices out of boredom such as cribbing or chewing wood.

Climate, especially harsh winters, can lead to some more carnivorous tendencies, too. In Iceland, for example, horses are often fed a diet consisting of dried fish in the winter months as a source of increased protein.

These additions to their diets keep their systems healthy and help them survive a cold, unforgiving winter. Here, too, though, they are not really eating meat, so much as being fed derivatives of meat. (source)

Take, for example, Socks, the famous meat-eating pony belonging to Sir Ernest Shackleton. (source) Around 1908, Socks was recorded as having shared meaty meals with his owner while completing harsh arctic explorations.

Times of war or other troubled times have led to some historical accounts of horses eating meat, too.

According to Rosalind Dalefield, in desert lands where vegetation was scarce and warring regularly occurred, people such as the Bedouin (of Arabian horse origination fame), fed their horses a mixture of honey, dried locusts, and dried camel meat. (source)

Sometimes, horse owners in Europe and America will add beef gelatin and bone meal to horse feed. While not fed to horses outright, these are common supplements, fortifying food as additives to help horses stock up on needed proteins and fats.

Horses can also suffer from pica, a mineral deficiency, and may find themselves gnawing on totally out of the ordinary things such as bones, antlers or cartilage in an effort to balance out those missing nutrients. (source)

When else might a domestic horse eat meat? When they don’t necessarily know what it is, but know you are eating it. There have been stories of curious horses nosing up to owners eating cheeseburgers and taking a bite.

This is not because they sought out meat based on a craving, but rather more simple – they saw you eating it, so they knew it was edible, so they wanted to steal a little bite! Meat in that small of a quantity (a quick nibble) is not going to affect their digestion, either.

Things such as dried fish, cheeseburgers, etc. also may not be desirable to a horse because they are meat, but rather for their sodium content.

A horse enjoys a good salt lick – and its body craves those minerals – so the appeal of the Icelandic dried fish while providing protein benefits, was probably more in the salty snack vein for the horses themselves.

If you have seen a horse kill a small rabbit or mole or other small creature, it probably is not for food. Horses are herd animals that are strictly protective of their homes and their herd mates.

If an unsuspecting – or even possibly ill-meaning – critter wanders into their territory, they may indeed attack it. Using teeth and hooves to kill a supposed enemy, though, is different from them killing for food.

Where You Can Learn More

The author, CuChullaine O’Reilly, has written a book called Deadly Equines: The Shocking True Story of Meat-Eating and Muderous Horses which is available on both Amazon and Kindle. No doubt this book idea was conceived during the research for his coffee table book, The Encyclopaedia of Equestrian Exploration (also on Amazon).

At the end of the day, the physical nature of a horse means its not set up to eat meat. From teeth to stomach to extracting nutrients, the body of a horse is overwhelming naturally vegetarian. While there have been some exceptions of – and some animal additives put into their foods – just because some horses do eat meat in small quantities does not mean most horses could or should.