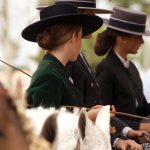 Doma Vaquera is not just an exquisite sport that has captivated people in over 40 countries where it is practiced. Originally a form of horseback riding practiced by Spanish cattle workers that worked in the fields with fighting bulls and cattle, it’s become an art form that can be appreciated by everyone.

There’s not much-written material about it throughout history, it’s mostly word-of-mouth teachings that have been passed from one family member through another.

What Is Doma Vaquera? Doma means “dressage”, and Vaquera means “western”. This sport and the traditional art form most resembles a sort of mix between the advanced maneuvers of classical dressage, the one-handed nature of western dressage and the speed and maneuvers we commonly see in reining.

This beautiful style of equitation originated in Spain, Andalucía most specifically, where the horse and the vaquero (rider) work with herds of semi-wild cattle and/or Spanish fighting bulls while holding the reins with only one hand.

If the cattle turn aggressive, the rider can use a long, wooden pole called garrocha to fend off the animals. Typically 12 foot in length, the garrocha is used as an extension of the rider’s arm to push and guide the cattle.

The Doma Vaquera horse must be highly trained for the job and submissive. The work hours are long, so it must learn to respond right away to its rider’s request.

Traditionally Spanish breeds such as the Andalusian and Lusitano are used for Doma Vaquera as well as crossbreeds like the Anglo-Arabian, however, any breed can be trained for this discipline. Horses that do well in Dressage or Reining will be most suited for this equestrian sport.

The original vaqueros’ uniforms are meant to be completely practical and are made from materials and fabrics that can withstand extremely harsh arid conditions, without losing pomp and ceremony. They are elegant but also comfortable and durable.

Acoso y derribo is an equestrian part of the Doma Vaquera competition that is done in pairs. The riders participating are a garrochista (the one managing the wooden pole) and the amparador.

Acosy y derribo translates to harassment and demolition in English. Both riders pursue a single cow or bull while riding, and their goal is to cause the cow to fall to the ground a specific time frame. The idea is to simulate the chase of a cow or bull that has strayed from the herd.

While this event may have its origins in actual and necessary cattle work, it isn’t something that would be considered humane, especially in the United States. The Royal Spanish Equestrian Federation in Spain eliminated this event from official competition in 2010 (source).

The Vaquera competition is based on the rider fending off any animal that gets too close, but unlike the traditional Doma Vaquera, the garrocha isn’t employed.

Through time, it turned into a reining event in which the rider performs complex tricks and maneuvers his/her mount. The style, including its tack and dress aspects, evolved into a competition sport, and most recently, into working equitation or Doma de Trabajo. It is recognized by the International Equestrian Federation and is included as the seventh discipline of the World Equestrian Games.

The modern form of Doma Vaquera as a competitive sport is performed in a 60mx20m arena and the test lasts 8 minutes. The rider and horse must show practicality and precision while executing the necessary movements when facing a fighting bull.

One of the main differences you might notice between Doma Vaquera and traditional dressage is that the arena is not divided with letters, instead, typically it has four posts in the corners and two in the center as a minimum.

The horse and rider must come into the arena, salute, and begin their performance, which will consist of Vaquera walk and several movements such as walking on both reins, making small and large circles, half passes, pirouettes, reverse pirouettes, rollbacks, spins, gallops, turns, flying changes, canter, and skid or sliding stop.

The changing of leads and direction at gallop must be done without any alteration in the rhythm and must be executed at a specific place in the arena. Changes in the speed and drive of the horse are a must. This video is a great example of a modern Doma Vaquera competition.

The signals from the horse to the rider should be imperceptible. The maneuvers are determined in a pattern, and the horse must always be attentive and willing to perform the activities indicated by the rider.

Just like the original cattle workers, the vaquero must do all this holding the reins only with his/her left hand. The garrocha can result in a breathtaking performance when used in the competition, especially when the vaquero competes without reins.

Three judges check the technique and movement marks. They review submission, impulsion, positioning, seat, the position of the rider, the precision of aids, difficulty, and complexity of movements combinations, the dress, and tack, and last but not least, the vaquero expression.

The rider must not mark the horse with spurs during the performance or be heavy with the hands. This can result in a loss of points or elimination.

The horses are vetted and strictly inspected before the competition starts. If the horse is not in perfect condition and soundness, it is not allowed in the tournament.

When competing in Spain, there are no restrictions on the horse’s breed, type or size. The Doma Vaquera can be purebred or mixed breeds with Anglo-Arabians (Thoroughbred x Arabian) being popular. In the United States, the competitions are held most commonly in Andalusian horse breed shows, since the Andalusian horse is short coupled and can move well off their hindquarters.

Doma Vaquera pursues a balanced and methodical training of the equine so that the vaquero manages to perform all his orders in harmony and balance. The horse must be so attentive to its rider, that together they become a perfect pair.