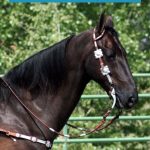 There’s nothing quite like the high-action spectacle of the American Saddlebred in the show ring. Saddlebreds are energetic, intelligent, and love to perform – no shrinking violets in this breed! They are often susceptible to unwarranted criticism by those who aren’t familiar with them, so keep reading to find out 15 things that make the American Saddlebred so special.

1. They are an All-American Breed.

In the 1700s, colonists brought thoroughbreds from England and crossed them with a now extinct breed called the Narragansett Pacer. People were looking for an all-purpose, comfortable riding horse that could also be used on the farm. And so, the American Saddle Horse was born.

2. They used to be called “Kentucky Saddlers”.

Eventually, the “Kentucky Saddler” was born: a bigger, flashier version of the current “American Saddle Horse.” These horses were the direct ancestors to our modern American Saddlebreds, and they were favored by officers in the Civil War: General Grant, General Lee, General Jackson, and General Sherman all rode Kentucky Saddlers.

In 1891, enthusiasts founded the American Saddlebred Horse Association or ASHA, and it is the oldest breed registry in the United States. (asha.net)

Saddlebreds are good-natured and energetic. In the show ring, they are judged on their liveliness, good manners and willingness to perform. ASBs have a reputation for being “hot” or “crazy,” but in truth, they’re just excited about life. They perform well under saddle, but are also commonly shown in harness. Intelligent, inquisitive, and quick to respond to your aids, an ASB is a popular choice for many disciplines.

The American Saddlebred, or ASB, can be found in many different disciplines. Eventing, jumping, dressage, cutting, roping, farm work, pulling a carriage: they can do it all! Saddlebreds are gaited horses, which means that some can perform an ambling, four-beat gait that is different from the standard walk, trot, or canter.

These horses are “five-gaited”: they can perform both a trot and an ambling gait. This is a difficult feat for other gaited breeds, such as the Tennessee Walking Horse.

From The US Equestrian Federation:

The rack is not just a faster version of the slow gait: there is a slight hesitation between the second and third footfalls in the slow gait.

7. They can Jump and do Dressage, too!

The Saddlebred that you see in a saddle seat show excels on the flat where it can showcase its high-stepping trot and flashy rack. Athletic and willing, these horses are brave and kind-hearted. Depending on the horse’s breeding and conformation, a Saddlebred can make a wonderful jumper, eventer, or dressage horse. A sportier ASB will have a good hind end, solid legs and feet, and a less dramatic headset than his showier counterparts. But he’ll still have that Saddlebred vigor, and won’t require a lot of convincing to move forward – handy for a long jumping course.

8. They make good matches with other breeds.

The National Show Horse originally developed by breeding American Saddlebreds and Arabians, although now it’s a separate breed altogether. These crosses have the athleticism and elegance of a Saddlebred, but are often more versatile for the owner’s chosen sport.

9. They’re commonly confused with other breeds.

Many people see a horse in a saddle seat show ring and assume it’s a Tennessee Walking Horse. They see an unusual flat saddle, a long mane and tail, and a high-stepping gait. However, many other breeds compete in these events besides Saddlebreds.

Here are some distinguishing characteristics to help you identify if the horse you’re admiring is indeed an ASB:

Both ASBs and Standardbreds are often used in harness, but for quite different purposes.

Of course, these differences are only to help you understand general breed characteristics, and they are not indicative of characteristics of all individuals of that breed.

10. They are not subject to soring.

When people often hear about abuse and terrible practices within the saddle seat community, they’re thinking of the “big lick” style of showing Tennessee Walking Horses. “Soring” is a practice in which caustic chemicals are applied to a horse’s feet and pasterns. When the horse moves, the chains of an “action device” cause pain and burns when the horse drops its feet. Because the running walk requires power from a horse’s hindquarters and an exaggerated motion of the front feet, soring is a quick and dirty way to make a horse step higher, without proper training or talent.

It is painful, barbaric, and illegal, and there are many organizations dedicated to eradicating this practice for good.

Soring the legs of a trotting breed like a Saddlebred would be ineffective. ASBs are required to trot, and no horse will move forward at a proper trot with burning feet. Show horses are still trained to lift their legs with action devices such as stacks, chains, and rubber bands called “stretchies.” However, these devices are not permanently attached to the horse’s feet, are not allowed in the show ring, and should only be used properly as temporary training aids.

Saddlebreds can come in any color. Often referred to as “the peacock” of the equine world – they’re a truly beautiful breed. The most common colors for an ASB’s coat are brown, chestnut, bay, and black. Most colors are accepted into the registry as per the ASHA Rules and Regulations:

12. They’ll be your friend for many years.

With proper care and attention, an ASB can work well into its teens and twenties and beyond. They are healthy horses and should give their owners many happy years together. The average lifespan of an American Saddlebred is about the same as other horses: 25-30 years, depending on the individual.

William Shatner raised Saddlebreds, and even featured one of his own mares in an episode of Star Trek.

Famous Saddlebreds on the silver screen:

Popular with the media and in the show ring:

The American Saddlebred is a testament to the legacy of equestrians in the United States. One of the oldest and most treasured breeds, those who find themselves in the company of an ASB will be charmed, delighted, and captivated by their good nature and flashy movement. And oh yeah, they are fun to ride, too!

If you want to learn more about horse breeds, check out these articles: