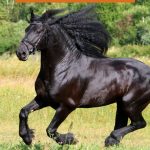 The Friesian horse commands attention wherever he goes. His distinct jet-black coat and fancy footwork make him a star in the show ring, and his calm temperament and gentle demeanor delight his human friends in the barn. But although Friesians are rising in popularity, they still remain a rare and mysterious breed. Here are 15 things you probably didn’t know about these majestic horses.

The Friesian (or Frizian) horse hails from Friesland, which is a province in the Netherlands. They originate from ancient forest ponies, and were originally bred for battle and farm work.

They appeared in North America as a handsome black trotting breed in the 1600s, pulling carriages in New Amsterdam (now New York City) and all but disappeared due to crossbreeding.

The breed was re-introduced into the US in the 70’s, and it has been making a comeback ever since. (source)

The breed is a popular choice in historical dramas like “300”, “Emma,” and “Sense and Sensibility,” and also in fantasy television shows like “Game of Thrones.”

Most notably, the fictional Sandor Clegane (The Hound) rode a “handsome black stallion…almost as large as a destrier but much faster”: a part perfectly played by a Friesian.

Destriers are medieval warhorses that carried knights into battle. Friesians were originally bred for this purpose, which is probably why they fit right into these roles.

Although some artistic liberties are usually taken with these roles. The modern Friesian as we know it has only been around for about 500 years: certainly not during the times of Alexander the Great! Still, a Friesian’s even temperament and handsome appearance make him a perfect choice for a working horse actor.

Perhaps the most famous Friesian of all is Othello, the horse who starred in the popular 1985 film “Ladyhawke” and reignited America’s interest in the breed.

Friesians are famous for their sweet and friendly temperaments. A “cold-blooded” draft breed, they are calm and collected.

They don’t bolt at the first sign of danger, but they have a tendency to freeze and face a threat instead. Kind and honest horses, they are willing to do the tasks their humans ask of them, even if they are uncertain.

Friesians are intelligent and trainable, and combining those traits with their famous good looks makes them perfect for performing tricks and working on movie sets. (source)

4. They are Exceptionally Useful.

Friesians are athletic, agile, and versatile. They are suitable for many different disciplines, and their flashy appearance and plucky attitudes make them popular in the show ring.

Friesians were originally bred for battle and light farm work. They are popular at entertainment jousting events and are still found on small farms today. (fhana.com)

While there are three different “builds” of the Friesian (light, medium, and heavy build) and two different “types” (baroque and sport) there’s no doubt about it: they are heavy horses.

They’re much better suited for pulling a carriage or riding on the flat, rather than jumping. But, owners often jump them casually if the horse is willing and able.

Friesians crossed with warmbloods or thoroughbreds and may be more suited for jumping events. Friesians do not get a second wind like other horses, and which makes their stamina less than ideal for rigorous jumping courses.

Most Friesians are tall by nature: their height reaches between 15 hands and 16 hands (60 to 64 inches) at the withers.

Purebred registered Friesians have very strict breed standards, and anything outside of this range is not acceptable: stallions must measure 15.3 hands and mares 15 hands.

Unregistered Friesians have a wider range. They can be as short as 14 hands or as tall as 17 hands, or anywhere in between.

7. Friesians are a Rare Breed.

Friesians are something of a rare sight in North America, although they are much more popular in their native homeland of Holland. There are only about 8,000 Friesian horses registered in the United States. (source)

The breed was imported into the country in the 1600’s, as “black trotting horses” were reported in New Amsterdam (present-day New York City). But the Friesian disappeared over the years due to rampant crossbreeding.

Thanks to careful breeding efforts beginning in the 1970s and widespread popularity in movies and tv shows, Friesians are making a comeback. but they’re still considered a rare breed.

8. The breeding selection process is rigorous and strict.

A team of qualified judges from Holland travels to the US to judge Friesian foals and adults, so they may be registered in the “Friesch Paarden Stamboek studbook”, or FPS.

Only the top 20-30% of horses will receive a “star” status. For mares, the best of the best of those with star status may be designated as a “model mare”.

For a colt, becoming a “qualified” or “approved” stallion is very difficult: there are only 100 or so stallions approved for breeding. Crossbreeding is strongly discouraged to protect the integrity of the breed, but if you’re just buying a pleasure mount and not running a breeding program, a Friesian cross could be a good alternative. (fhana.com)

9. They Suffer from Unique Genetic Diseases.

In general, Friesians are healthy horses. They have been bred to have very hard feet and owners often forgo shoes.

They were widely used as commercial carriage horses in the early 20th century, which means that they were bred to eat less and produce less waste than other horses, despite their larger size.

A Friesian with no genetic problems will likely be an easy keeper, but that doesn’t mean they’re exempt from all health issues.

A common condition found in working Friesians is anhidrosis, which is the inability to sweat properly. They also have dark black coats, heavy manes, and thickly feathered fetlocks. A Friesian might struggle in a warm, humid climate. They are also prone to skin irritations, infections under their fetlock hair, and bleaching from the sun.

Purebred  Friesians are also susceptible to several severe genetic disorders due to inbreeding and limited availability of animals in such a small gene pool:

Registered Friesians in the FPS are DNA tested to see if they carry the gene for Dwarfism and hydrocephalus, to protect offspring. But the others can be luck of the draw, with often devastating results.

10. Friesians are an Expensive Breed.

Because of their scarcity and strict breeding standards, Friesians are expensive. A registered Friesian used in a breeding program can fetch a variety of high prices, and this price can increase 10-20% depending on the status of their training. The median cost for a well-bred well-trained Friesian is around $25,000.

Crossbred or unregistered Friesians may be less expensive to initially purchase, but you should always do your research and select a responsible, quality breeder. Poorly bred animals could have a host of health problems that may cost thousands in the long run.

11. Black is their favorite color.

Studbook registered Friesians are exclusively black. They may appear dark bay or blue-black, but their signature color is a hallmark of the breed.

Rarely, a chestnut or red “fire” Friesian appears, but stallions with this coloring are not allowed to be registered in the studbook.

Horses are genetically tested for the gene that produces the chestnut color, and those that possess the gene are also excluded. Because of this, the breeding pool of “fire Friesians” is very small.

However, the Friesian Heritage Horse and Sporthorse Int’l registry is dedicated to keeping the chestnut color alive, and will accept chestnut Friesians and crossbreeds in a variety of shades.

12. Their Lifespans are Short.

Most horse breeds have a life expectancy of 25 to 30 years. For Friesians, this range is much shorter. Their average life expectancy falls somewhere 13 and 17 years of age.

This is likely a result of the large amount of inbreeding in their bloodlines and relatively small breeding gene pools, although the exact cause is unknown.

13. They Have a Lofty Trot, but they aren’t Gaited.

While Friesians are often seen in saddle seat show rings with gaited horses like American Saddlebreds and Tennessee Walking Horses, they are not a gaited breed.

A true “gaited” horse can perform what is called an “ambling gait” or a smooth four-beat gait that is different from the standard walk, trot, or canter.

However, Friesians have a high carriage and move with a flashy trot that makes them good candidates for saddle seat classes in the show ring – and they’ve got the good looks to stand out.

14. Friesians are Popular at Funerals.

T. Cribb & Sons is a British funeral parlor founded in 1881. They imported a pair of Friesian stallions from Holland to pull their Victorian hearses. At one point over the years, more than 700 “Belgian Blacks” pulled the funeral carriages through the streets of London. In 1985, they restored a London hearse with original velvets, and Friesians continue to lead funeral processions to this day.

In 1913, the breed was almost extinct. Only 3 Approved stallions remained. Not long afterward, the newly formed “Friesian Horse Association” purchased Paulus: the patriarch of all modern Friesian stallions. (source)

Is a Friesian right for you?

The Friesian breed continues to improve with careful DNA testing, rigorous standards, and increasing public interest. Perhaps one day, you could own a Friesian of your very own!

While you are here, check out one of these other interesting articles: