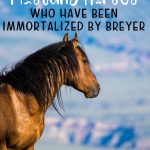 Almost every breed out there has a famous horse or two. These are horses that have, in some way, made an impact on the breed. Whether through their own show records, bloodlines, or just popularity these mustangs are amazing. They come from the wild yet are still able to bring awareness to hundreds of thousands of people around the world about how awesome wild horses can be. Here are some famous mustang horses that Breyer has chosen to immortalize into model horses.

Cobra is a BLM Mustang adopted in 2010 who has excelled at dressage. Cobra is a prime example of how a wild horse can compete against the “big boys”, including sports like dressage that are dominated by fancy horses with fancy pedigrees worth tens of thousands of dollars.

Cobra and his rider, Marsha Hartford-Sapp, worked as a team to excel at dressage competitions. In 2015, Cobra was able to earn a World Championship title in Level 1 Freestyle Western Dressage.

That same year, he was named USEF Horse of the year in Western Dressage as well as the 2015 USDF Adequan All Breeds National Champion.

The equestrian world took notice and, in 2017, a Breyer horse was fashioned in his likeness. This model horse is becoming harder and harder to find but you can still pick it up on Ebay to complete your collection. The model even features his telltale hip brand!

Cobra has continued to compete and win in dressage. In 2018 he was even named USEF Horse of the Year, the highest award the organization bestows on any horse.

Where Cobra has made his mark in the dressage world, the pretty gray mare Hwin has done the same for the eventing world.

Picked up by professional horse trainer and eventing competitor, Elisa Wallace, Hwin the mustang showed herself to be extremely trainable with an affinity for jumping.

The pair competed in the 2015 Mustang Magic Makeover placing fourth. Since then, Elisa has gone on to compete in eventing with Hwin.

Breyer has also recognized this mustang’s contribution with a model horse in her likeness. Hwin’s Breyer is available on Amazon.com and makes an excellent gift for any mustang lover!

Elisa has an excellent YouTube channel you can check out with many videos of Hwin. My favorite is this one from the 2019 Georgia Open Mustang Show.

Picasso is a beautiful mustang stallion known to roam the Sand Wash Basin HMA in the mountains of Colorado. His beautiful pinto coat color is easily spotted from a distance and he is a favorite of photographers that visit the area.

The Breyer models of Picasso are a little bit harder to find now though you can still find a few available from sellers on Amazon.com.

At over 28 years old he still lives wild on the range but no longer has his own band of mares. Check out this video of him living his best life in the wild.

In my article about the types of mustang horses, I touched on the charming little ponies of Chincoteague and Assateague. Misty, is by far, one of the most famous wild horses.

Marguerite Henry captured her story in the award-winning book, Misty of Chincoteague.

Breyer celebrates this remarkable pony with a model of her and her foal, as well as a copy of the classic tale. This set is perfect for any horse lover and is available on Amazon.com.

The story of Hidalgo the mustang was made famous by a 2004 biographical film about Frank Hopkins. The film tells how he competed in a long-distance race in 1891 with his mustang horse.

Later the pair became a regular performer in Buffalo Bill’s Wild West Show. There is some controversy regarding how much of the story of Frank and Hidalgo is true but, the story and subsequent film have served to shine the spotlight on the Mustang horse.

While Breyer did produce a model of Hidalgo, it can be hard to find. As of the time this article was written, three are still available on Amazon.com from private sellers.

No article about famous horses would be complete without mentioning Spirit. This fictional horse was created by DreamWorks studio as the main character in the wildly popular animated cartoon, Spirit: Stallion of the Cimarron.

It is my opinion that famous mustangs don’t have to be real. The people at DreamWorks were able to use their imagination to bring this character to life and introduce the mustang horse to adults and children around the world.

At least two different model horses have been made of him and are available on Amazon.com.

Another famous mustang, from another literary classic, is Blue. Blue is an appaloosa mustang filly who roams the wilds of Idaho.

In this children’s novel by artist Annie Wedekind, you learn about Blue’s life on the range and her journey when she is captured by rogue cowboys.

Though a piece of fiction, it’s an easy read for most kids ages 9 -12 and will get them thinking about wild horses!

The boxed set with the book and Breyer horse is conveniently available on Amazon.com.

The mustang horses above have done an excellent job positively portraying the breed to the general public. The more people know about wild mustangs, the more likely they are to adopt them. Be sure to check out my breed profile on wild mustang horses for more detailed information!