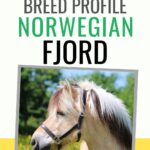 The Norwegian Fjord horse is a true example of “small but mighty.” With an instantly recognizable stature and hearts full of spirit and love, this distinctive cutie has captured hearts all over the world.

Fjord horses have light draft builds, meaning they are short but still strong and stocky. They have the strong muscle and thick bones of a draft horse, but are overall smaller in size and much more agile. A strong, arched, thick neck and a compact body with thick legs make up its distinctive shape.

Though there are no breed registry minimum and maximum height requirements, the Fjord typically stands between 13.2 hands and 14.2 hands tall (source) at the withers and weigh between 800 and 1,100 pounds.

Despite that shorter stature, those muscles aren’t just for show. These small horses are all power, allowing a Fjord horse to easily carry an adult rider or pull heavy carts and loads.

Regardless of their height (as most of them fall into the height range of a pony), Fjords are 100% horses physiologically and not ponies.

Fjords have broad, flat foreheads (source) and a face that is generally straight (or occasionally slightly dished, though not to the extent of an Arabian), large perky ears and small eyes.

The coat of a Fjord is typically thick and coarse, and becomes even heavier in the cold winter months.

Their mane is also thick and although it naturally grows long, it is usually clipped short into an easily recognizable crescent-like Mohawk that stands up straight.

This not only emphasizes the curve of the neck but makes for easier grooming. The Mohawk style also showcases the black dorsal stripe that runs in the middle of the cream color mane hairs!

Their smaller size and hardy nature also means they have a longer lifespan than many other larger, more delicate horse breeds. They have an average lifespan of about 30 years – or even more!

Aside from the occasional gene variation resulting in a white coat, the only coat color you will find on a Fjord horse is dun (a light, dusty tan or blonde with dark legs and a dark dorsal stripe down the spine).

There are, however, five variations of the dun color which have recognized by the Fjord registries since 1922:

According to the Norwegian Fjord Horse Registry, the most common color, approximately 90% of all Fjord horses are a brown dun, with the rest of the colors together making up the remaining 10%.

The coat is a pale brownish yellow, varying from as light as a creamy brown to something darker – almost a light chestnut. The dorsal stripe can be black or dark brown, with the majority of the mane and tail being cream or white.

This red-tinted coat has shades that are lighter – even the tail is lighter. The body is more of a pale golden color, while the dorsal markings are red or red-brownish, never black, but always darker than the coat color. The rest of the tail (and the mane) will be cream.

Having a gray body, the gray dun’s appearance runs from a light silver to a dark gray with dark gray or black dorsal striping. The mane, tail and the forelock will be a much lighter gray than the body.

Though the breed color term is simply “gray”, it is not a true gray by way of genetics and is actually still a dun, as the gene pool of the Fjord horse does not even carry the gray gene.

Also known as “uls” dun, this horse has a cream body color with a black or off-black dorsal stripe and n even lighter mane and tail.

Genetically it carries the pattern of a bay dun that is diluted by a cream gene allele. Sometimes the white dun is also called a buckskin dun.

This is the rarest dun color of all Fjords. Technically, it is a red dun with an additional dilution to make the coat a light cream. The mane and tail can be completely white, and the dorsal stripes may be almost completely disguised or blended into the white.

There is also another outlier of an actual white coat. Called “kvit,” it acts as an unofficial sixth color along with the recognized five shades of dun.

Thanks to two cream dilution alleles on any other color, this results in a horse with a light cream coat, indistinct dorsal striping, and blue eyes.

White markings on Fjord horses are pretty rare, but they do occur. When it comes to showing and registering, only a small star is allowed, but no other white markings.

The Norwegian Fjord Horse Association, in 1982, said that stallions of any age with any white markings other than a small white star cannot be bred for registered foals.

The Fjord horse is known for being very good-natured. Their draft-like personality makes them calm and trainable.

Since they do not tire easily, they are always willing to work and they value a close relationship with their people.

Fjords are also very gentle and do not spook easily, making them typically safe horses to be around children when properly trained.

Thanks to their hardy nature and strong build, the Fjord horse is actually one of the healthier breeds. Colic and laminitis are rare. However, proper care of their coat is needed to prevent rain rot, because of their heavier coats.

They are also classic “easy keepers,” meaning they can subsist on less feed than many other breeds. That does mean though that they run the risk of more easily becoming overweight.

The History of the Fjord Horse

The Fjord horse has the interesting distinction of being one of the world’s oldest and purest breeds, descending directly from the Przewalski, a primitive wild horse native to Asia.

In fact, the Fjord has maintained a long history of keeping its bloodlines pure, with no other crossbreeding.

Since horses have been in Norway since the last ice age, it is thought that the present day Fjord’s ancestors migrated across the ice to Norway and were first domesticated well over 4,000 years ago.

Thanks to their power and strength, the Fjord horse was first used by the Vikings as a war horse, before being used for many hundreds of years as a workhorse on farms in Norway.

In World War II, Fjords served as warhorses, prized for their ability to work over treacherous mountain terrain.

In 1910, the first Fjord horse Studbook was published and remains active today, with an estimated registered number of Fjords between 6,000 and 7,000.

Both American and Norwegian registries work together to promote the Fjord horse, preserve genetic purity and educate about the breed.

The registry also maintains a list of breeders in America as well as statistics on the Fjord horse in America plus a training program associated with Norway.

Because of their powerful build, the Fjord horse still puts its strength to use with heavy work, including plowing fields and hauling. However they are also agile and level-headed enough to make good riding and driving horses.

Their unique combination of strength and small size means they are perfect for anyone, from children to adults. On trails, their surefootedness makes them excellent mounts.

Fjord horses are a cute, hardworking and well-established breed. Short and stocky, and strong with a big heart, they are perfect working and riding horses.