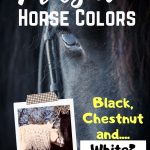 Can Friesians be white? Purebred Friesian horses cannot be white. In 2007 a white Friesian horse showed at Equitana. This horse, Nero, was actually 25% Arabian, 75% Friesian.

Most of the Friesian horses you will ever personally encounter will be black in color. In fact, they should be pure black with no white markings.

The breed standard for Friesian horses has been established to prefer all black horses with only a very small star permitted. Purebred, registered Frisian horses should not have socks, paint markings or strips of white on their face.

Instead, Friesians should be a beautiful pure black. The shade can range from a faded red to a blue-black depending on the horse and the time of year.

Selective breeding for the black color means that most Friesian horses are homozygous for black. As such, they should not be able to produce a chestnut or palomino foal even when crossed with another breed.

Of course, with most “rules” when it comes to horses, there are some exceptions.

Black is the breed defined color for Friesian horses. In fact, a stallion cannot be approved for breeding unless he is homozygous black but, that wasn’t always the case.

Before genetic coat color testing was available for horses, some Friesians were born chestnut. These horses, called “fox” Friesians, were no less purebred.

Even though they had two black parents, if both parents were heterozygous for the red gene, every foal had a 25% chance of being born red.

25% isn’t a lot but it is enough that several red Friesians do exist. The Fresian horse studbook, FPS, started requiring mandatory color testing for stallions to ensure that no additional chestnut horses were produced.

It is possible for purebred chestnut Friesians to be born but, they are not eligible for registration with any of the major Friesian horse registries.

The resulting foal can even be registered with the Friesian Sport Horse Association if all registration guidelines are met.

Nero is exceptionally beautiful but he is not purebred Friesian. He is rather, 75% Friesian and 25% Arabian. According to EuroDressage, a Dutch family living in Germany was given permission from the Queen of the Netherlands to breed purebred Friesian mares to a gray Arabian stallion.

The thought behind this mating was to introduce new blood into the otherwise limited Friesian gene pool. One of the resulting foals, a colt named Negus, was born gray instead of black.

It wasn’t until the half-Arabian, half-Friesian stallion, Negus, got a new owner that he was trained to ride and, eventually bred to purebred Friesian mares. Nero, the white Friesian who awed the public at Equitana, was the result of one of those crosses.

Other Colors of Friesian Horses

There are many other horses that may appear to be purebred Friesian but are other colors such as paint, pinto, piebald, skewbald, palomino, buckskin and even dun. All of these horses may look Friesian but, they are in fact, at most cross bred horses.

That, of course, doesn’t make them any less beautiful or breathtaking to look at. In fact, with careful breeding it would be possible for a horse to look almost 100% purebred but be paint, pinto or even champagne or pearl.

If you are wondering what some of these colors are, check out our horse coat color guide which has tons of pictures of various different horse colors.

You now know that purebred Friesian horses only come in white or, very rarely, chestnut. While black may be your only true color option for purchasing a registered purebred Friesian horse, if you are willing to look at crossbreeds the color options are limitless. Some of these Friesian part-breeds can even be registered with registries such as the Frisian Sport Horse Association.

Normally I link all sources in article with a hyperlink but, none of these sources have an SSL certificate. Because they show as not secure, it is your decision to view them if you choose.