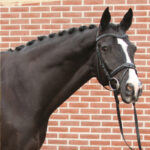 Dutch Warmbloods are some of the world’s finest equestrian athletes. The win medals at the Olympic Games, break world records, and consistently place at the top of the yearly FEI studbook rankings.

With a competitive spirit and willing disposition, these horses were born to win. Keep reading to find out what makes the Dutch Warmblood, or Royal Dutch Sport Horse, so special.

What is a Dutch Warmblood?

Horse breeds are sometimes described using terms that refer to their type and temperament – docile draft horses are “cold-blooded,” spirited racehorses are “hot-blooded,” and riding horses are “warmblooded.”

The specific term warmblood generally refers to a group of horse breeds that are bred specifically for equine sports. Their ancestors include heavier farm and cavalry horses that were eventually crossed with lighter riding horses. The result? A spirited yet trainable athlete that excels in competition.

The Dutch Warmblood is referred to as the Royal Dutch Sport Horse (or Koninklijk Warmbloed Paardenstamboek Nederland – KWPN) in their homeland of the Netherlands.

This breed is tall, muscular, and athletic – they are generally bred to jump, perform dressage, or drive. For those looking to compete at high levels of English riding competitions, the Dutch Warmblood is a popular choice.

When horses were primarily used for farm work and transportation, two breeds were popular in the Netherlands: the Gelderlander in the south and the Groningen in the north.

The Groningen was a heavier breed similar to the Friesian, and the Gelderlander was a slightly lighter and flashier cart horse. In those days, horses were used mostly for utilitarian purposes – pulling carts, carriages, and heavy farm equipment.

In the 1880s, Breeders began crossing the Gelderlander and the Groningen with stallions from Germany – particularly from the regions of Oldenburg, Holstein, and Hanover. They also imported fine stallions from France.

With the addition of Thoroughbred, Cleveland Bay, Hackney, Holsteiner, and Anglo-Norman stock to these bloodlines, the Dutch Warmblood became a well-rounded, quality breed.

Unlike other warmblood breeds in Europe, the Dutch Warmblood was never bred for use by the military. Several different types of Dutch Warmbloods emerged – one specifically for riding, one for driving, and one for farm use.

Lighter athletic horses were used for jumping and everyday riding, up-headed horses with a lofty trot pulled carriages, and heavier stocky types were used for farming. However, all Dutch Warmbloods were bred to produce a horse with “soundness, character, and a willingness to work.” These are still principles that are instilled in the breed today.

After World War II, mechanization in farming and transportation replaced the need for horses in the traditional way. Breeders shifted their focus towards producing quality recreation horses – powerful athletes that could excel in equestrian sports.

They focused their efforts on producing horses with the same qualities of soundness and character as the old farm horses, but vigorously removed poor-performing or lower quality horses from the breeding program.

The result was a horse with all the positive qualities of the old Dutch Warmblood, but one that also had good gaits and a talent for competition.

By the 1980s, the Dutch Warmblood began to dominate at the upper levels of competition – a talent that they still possess today. Queen Beatrix of Holland granted the Dutch Warmblood breed with the title of “Royal”, thus cementing the KWPN’s place in the history of the Netherlands as a whole.

Because the Dutch Warmblood is bred to perform at the highest level of competition, other breeds may be introduced into the bloodlines if they possess certain advantageous attributes.

Breeders who are looking for talented jumpers may add a Selle Francais. Those who are focused on dressage may add more Hanoverians. Totilas, one of the most “outstanding competitive dressage horses in the world” had a Dutch Warmblood mother and a Trakhener father.

Common crosses with Dutch Warmbloods include Hanoverians, Holsteiners, Thoroughbreds, Selle Francais, and Oldenburgs (among others). Some of the most competitive Dutch Warmbloods have a significant amount of other breeds that make up their DNA.

Unlike breeds such as the Friesian or Arabian, KWPN breeders more are focused on the effect of bloodlines on a horse’s performance, rather than on the purity of their lineage.  (source)

All KWPN breeders aim to produce “a competition horse that can perform at the Grand Prix level, with a constitution that enables long usefulness, and a character that supports the will to perform as well as being friendly toward people.” They should be well-built, trainable, and relatively easy to manage. (source)

There are three different types of Dutch Warmbloods: the riding horse, the harness horse, and the Gelders horse. It is estimated that 85-90% of KWPNs are registered as riding horses.

KWPN riding horses are suited specifically for jumping and dressage. In North America, a jumping horse may be categorized as a Hunter.

Dutch Warmblood Harness horses (often called Dutch Harness Horses or Tuigpaards), have significantly more knee-action and a higher self-carriage than the riding horses. They are excellent trotters, and are trainable and easy to handle on the ground.

The Gelders horse is significantly less common in the United States. They are characterized by their suitability as both a riding and driving horse. Gelders horses are reliable, willing, and good-natured.

Depending on the pedigree, a foal may be entered into different sections of the KWPN registry. For example, foals that are bred from two registered KWPN parents are entered into the Foalbook or Register A.

A foal with one KWPN parent and one non-KWPN parent (non-sporthorse, non-warmblood, or non-registered) would go into Register B.

Foals in Register A or the Foalbook are generally allowed into the breeding program. Foals listed in Register B must be evaluated and inspected at a Keuring event. (source)

The KWPN takes the naming of foals seriously. In fact, for each year, they assign a letter and every foal born that year must have their registered name start with the same letter. Learn more about that, as well as some awesome name ideas, on my post with over 200 Dutch Warmblood Horse Names.

Every year, the KWPN holds an annual Keuring inspection in the Netherlands and North America. This event is an opportunity for owners and breeders to present their young horses for inspection for premium grading. They may also submit older horses to be accepted into the studbook.

Events at the Keuring include performance classes, such as the IBOP (Individual Suitability Test for Horses) or EPTM (Mare Performance Test). These are competitions that display the talents of a young horse in the chosen discipline. Horses can also compete for titles and cash prizes. (source)

Dutch law made branding illegal a little over a decade ago, and foals today are more likely to be microchipped. However, branding is still legal in the United States, and Dutch warmbloods over the age of 3 are often branded after they’ve been inspected.

The KWPN brand is a shield surrounding a lion that is standing on its back feet. This resembles the Netherlands’ coat of arms. (source)

While they may be fierce competitors, Dutch Warmbloods are generally friendly and affable. They are bred to be relatively easy to handle, despite their large size and bold attitude towards competition.

A strong Dutch Warmblood may not be the most suitable choice for a new rider who lacks confidence, as they can often be quite “hot”. But they are bred to be courageous and willing, and a bold rider could benefit from a horse with a more spirited personality.

Because of the focus on performance rather than aesthetics, Dutch Warmbloods can vary in appearance between individuals. Overall, they are well-built and have good conformation. To be bred, mares must stand at least 15.2 hands, and stallions at least 15.3 hands.

Most Dutch Warmbloods range between 15 and 17 hands, with the average being around 16 hands. This height is generally the most effective for jumping and dressage, though there is no upper height limit.

Dutch Warmbloods are well-muscled, and they weigh between 1,200 and 1,500 pounds. These athletes have deep chests, well-sloping shoulders, powerful hindquarters – and a high-set tail. They are generally built somewhat “uphill,” but should have balanced proportions and a rectangular frame.

They can be almost any color, but most Dutch Warmbloods are chestnut, black, gray, or bay. They also frequently have white markings.

Dutch warmbloods are bred to be sound and healthy to withstand the rigorous demands of competition. Horses with congenital defects or leg problems are not allowed to be bred. While generally sound, they may be afflicted by hoof injuries including navicular syndrome or sesamoids, or other leg injuries from consistently hard work. (source)

While most KWPN horses are bred specifically for the upper echelons of their selected sport, many succeed at other disciplines. Dutch warmbloods are talented eventers, excelling in cross-country, showjumping, and dressage portions of competition.

For those who wish to compete in the lower levels of competition, Dutch warmbloods can also make excellent partners for amateurs or casual riders. Because of their good natures, they are often used in English riding programs to teach advanced students.

The KWPN studbook has dominated at the Grand Prix level of dressage and the Olympic games for the past 40 years. They consistently place in the top 3 studbooks for FEI’s best performers for jumping, dressage, and eventing. In 2018, the KWPN studbook ranked #1 for all three events.

Some of the most significant Dutch Warmbloods include:

Dutch Warmbloods can be an expensive breed. A foal from the legendary Negro (sire of Valegro, a champion dressage horse) can cost between $35,000 and $40,000! (source)

These horses are sometimes available on Equinenow.com for $1500 – $3000, but these prices generally reflect untrained youngsters, half-KWPN mixed breeds, or casual lesson horses.

Is a Dutch Warmblood right for you?

The Dutch Warmblood is a popular choice for amateur and professional equestrian competitors. They dominate at the upper levels of competition, and are commonly found in the lower levels as well.

Though they are big and bold in the show ring, they are generally easy to handle on the ground. While a Dutch warmblood may not be the best choice for a beginner rider, they remain a solid choice for an amateur looking to rise to the next level of competition.