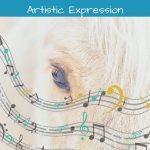 As prey animals, horses rely on all of their senses to alert them to danger. This is why they often react poorly to loud noises and must be de-sensitized to startling or unfamiliar sounds. But how do horses feel about music? There is scientific evidence to suggest that music has a positive effect on our equine friends.

While playing music to stabled horses, researches measured cortisol levels and heart rate, noted signs of relaxation or stress, and examined other variables found in a normal stable setting.

There have been several scientific studies over the years that sought to find out whether or not horses respond positively or negatively to music. Let’s take a closer look to find out what that really means.

Before establishing whether horses enjoy music or not, scientists had to set a few parameters. Each of the studies conducted on stabled horses measured music that fell within a horse’s average hearing range: generally between 1,000 and 3,000 Hz. The music had to be loud enough for them to hear, but not so loud that it would cause distress.

How well do horses hear?

As it turns out, horses hear about as well as humans. Like other hoofed animals, they can turn their ears 180 degrees to better locate the source of a sound. However, they can’t pinpoint noises as well as some other animals – their ears are good at locating a noise, but they rely on their eyes to figure out what it is.

This is sometimes a challenge for stabled horses, who rely more on sound than horses in a herd, simply because they can’t use their eyes and bodies to communicate. As a result, stabled horses are often noisier than their friends out in the pasture.

Horses kept stables for long periods tend to show more stressed behaviors than those kept outside with herd mates. Researchers had to keep this in mind when examining the horses’ responses to music.

Are horses picky about the musical genre?

Results: The horses did not enjoy the musical stylings of Green Day or contemporary jazz, but Beethoven and Hank Williams caused more relaxed behaviors.

It’s possible that the slower tempo or quieter volume of Beethoven and Hank Williams allowed the horses to get auditory feedback from outside the stable. Musical genres include a wide variety of different types of music, but other studies suggest that horses respond best to relaxing “new age” music, rather than hard rock.

Can music improve the emotional state of racehorses?

Researchers in Poland wanted to figure out if music influenced the emotional state of racehorses.

Results: Researches discovered that music had a positive effect on the racehorses over the course of the study. They were more relaxed, and they performed better in races than their counterparts who had not been exposed to music.

There is plenty of anecdotal evidence that playing the radio at racing barns can calm the horses. But scientists wanted to find out for sure by testing stress hormone levels in their saliva.

Results: Apparently, massages are more effective at relaxing your horse than music, but the music relaxed the horses more than nothing. Scientists measured lower amounts of cortisol in the saliva of horses that received a soundtrack in their stables. The lowest amounts occurred in the horses receiving regular massages. Imagine how relaxed they’d be with a nice massage and some restful music?

It’s not just young racehorses who can benefit from music therapy. Researchers studied a group of geriatric horses to find out whether or not music was a viable therapy for stress reduction in older animals.

Results: Playing music for these horses had significant but temporary results. For the first few weeks, the group that listened to music had lower heart rates, and they were less excitable than the group that did not listen to music. However, after that initial period, the horses presumably became used to the music, and it had no marked effect.

Beware of the radio.

While several studies showed promising results with positive effects of music on horses, there was one that cautioned against the common practice of constant radio chatter.

Researchers looked at many variables that contribute to the development of ulcers in horses in typical racehorse barns: how much work the horses performed, how much turnout time they received, how early they were trained, etc.

While relaxing music is scientifically proven to have a positive effect on a stabled horse’s mental health, consider skipping the hard rock or talk radio stations.

So, horses generally enjoy music. But can they dance?

Most animals cannot keep a beat. And plenty of humans struggle with that skill too, although that has nothing to do with our biology. Music is a characteristic of human social interaction – other animals can make pleasant noises (such as songbirds) but the rhythmic sounds and coordinated tones that make music? That’s almost exclusively for humans.

That hasn’t stopped researchers from developing a test to determine whether or not horses are capable of keeping a beat by themselves, or whether “dancing” is strictly a learned behavior. The results of that study were inconclusive and the researchers admit it was more of a novelty. A much larger sample would be needed to determine if horses can synchronize with music on their own.

Nevertheless, horses can be trained with auditory cues (vocal commands) and using music in a training program can help center the rider, if not the horse.

Horses and riders have a long history of performing to music. Several prominent equestrian sports feature musical performances in competition (including one Olympic event!):

Riders traditionally use classical music, but popular titles have become recent fan favorites. Charlotte Dujardin and Valegro set the world record in freestyle dressage to the soundtrack from the Pixar film “How to Train Your Dragon.”

Andreas Helgstrand and Blue Hors Matine went viral with their 2006 World Equestrian Games performance to a jazzy medley including a remixed version of “Lady Marmalade.”

Laura Sumral won the World Freestyle Reining title with her version of “Let it Go,” and Aaron Ralston wowed the crowds with an elaborate performance set to “Gangnam Style.”

There are plenty of other ways people use their horses in musical performance: trick riding, drill teams, shows, parades, circuses. Or, anything else an enterprising performer may dream up!

Using Music At Home With Your Horse

There are many ways that you can use music at home for the benefit of your horses and yourself. It’s best if you test different kinds of music for your horse and observe his behavior, before implementing any music therapy during stressful situations.

You can play music for your horse:

The science is in: horses are musical creatures.

We still don’t know exactly why horses respond to music. Some theorize that the vibrations from the consistent beat and tempo are soothing. Others believe that playing music in a barn blocks out unfamiliar noises from the outside. Since horses can’t investigate things they can’t see, they become stressed hearing unfamiliar sounds that they can’t identify.

Hopefully, as research progresses, we can find out more exact reasons behind the why – and use that information to further benefit our equine friends.

With the right kind of music in the appropriate amounts, music can be a relaxing or fun addition to a training program. It can also be a soothing addition to stressful situations. See if your horse enjoys it!