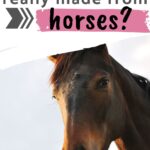 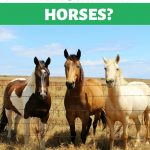 Growing up I had always heard glue was made from horses. That didn’t change when I got my first horse and started learning about horses. Every “cowboy” I meant talked about sending bad horses to the glue factory or the Alpo factory. I always looked at my white school glue differently after that. It wasn’t until years later I learned the truth about whether or note glue is made from horses.

Glue was originally made from animal collagen which can be found in skin, bone, and tissue. In fact, glue has been made from animals for a very long time in history. Animal glue has even been found in ancient Egyptian burial tombs!

Native Americans used to make glue from hides and hooves of animals. In early America it was common practice for ranchers to send unwanted horses to be processed at glue factories.

For the most part, this market was eliminated as new, synthetic glue materials became available. Though, there are still some exceptions as I’ll mention below.

Is Your School Glue Made from Horses?

White school glue is not made from horses. In fact, while it originally included milk in the ingredients, the traditional school glue you are used to is now all synthetic.

Elmer’s Glue website specifically states that their product is made from 100% synthesized (man-made) ingredients. The same should be true for all white glues.

You see, most man-made chemicals are cheaper because they can be made in a lab. The process of extracting collagen from dead animals is time-consuming and much more costly.

It’s also better for the public relations department for the glue companies. When you have millions of kids across the world using your glues, you don’t want kids thinking that your product is made from dead horses.

Is Any Glue Made from Horses?

The answer here is: possibly. You see, there is still a use for animal-based glues. These are used in different industries but most commonly the furniture industry. Aside from furniture, animal glues can be used for bookbinding, glass making, etc.

While it is possible that some glue is made from horses today, it’s more likely that animal based glues are made from cattle. More cattle are processed in the United States each year than horses.

There are currently no horse slaughter plants operating in the United States. American horses are, however, sometimes transported to countries like Mexico and Canada to be slaughtered.

Why Were Horses Used for Glue?

The types of glues that are made from animals utilize the collagen found in the horse. Collagen is the body’s connective tissue. It can be extracted from hooves, skin and bones by boiling the body parts. You can even make glue from blood.

In fact, this video does a wonderful job of explaining why animals were used for glue in the past and why that practice isn’t as common now. It is very interesting!

Are Other Animals Used for Glue?

For animal based glue any type of animal can be used. Cows would be most common because of the numbers but some glues are made from rabbit and fish as well.

Most glues the average person encounters in their day to day life should be synthetic glues. This is especially true for glues common to primary schools. Is glue made from horses? It can be, but probably not very much anymore at all.

These days it makes much more sense to make glue out of synthetic compounds. For animal-based glues, it’s probably easier for glue factories to make glue from cattle rather than horses.