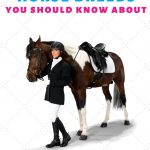 As the name suggests, this breed is characterized by the presence of tight and curly ringlets running through their body. Much like curly-coated poodles, the curly horse is believed to be hypoallergenic. There are a few different registries that track curly horses and curly horses are sometimes found in the wild as well!

This horse was originally bred by people living in the mountains, but domesticated in the 1980s. It is characterized by high intelligence, docile nature and smooth temperament. The most distinctive feature of this horse is its natural gait of 4 beats.

I’ll bet you probably haven’t heard of this one. This breed reserves the honor of being the first North American Horse Breed. In first appeared in 1676 in Rhode Island’s Narragansett Bay area, and is believed to be a hybrid of the Scottish Galloways and the Irish Hobbies. This breed is easy moving and has been crossed with Thoroughbreds to create the breed American Horse.

This breed was developed from Spanish stocks who were brought to America in the early 1500s. It is a small and agile breed that is known by many names, for example, Praire Pony, Chicksaw Pony, March Tackie, Grass Gut etc.

The American Quarter Horse is among the earliest horse breeds bred in America. It was created from ranch horses who had a mix of Turk, Barb, Thoroughbred and Arab breeds. This horse has heavy muscles and a compact body. It can run short distances much faster than other breeds. It is especially popular in roping, barrel racing and a variety of other horse events. It is one of the most versatile horse breeds in America.

This breed was developed in the Ozark Mountains in the 19th century for smooth riding in mountainous terrain. These horses have a surefooted gait and are excellent for long distance riding in the hilly terrain.

This breed has its roots in the horses that were shipped in 1600s to America from the British Isles. These horses have a distinctive way of moving their legs in a concerted fashion on one side of their body.

They are a versatile horse and the oldest American breed. Learn more about the American Saddlebred in our post with 15 fun facts!

This breed has a glorious past. It is believed that Columbus discovered a continent without horses and brought with him a group of horses from Spain on his second voyage, and settled them in Santo Domingo. The breeding between these breeds resulted in Paso Fino, which is distinctly characterized by its smooth gait.

The American Quarter Horse was founded based on solid-colored horses of stock type. During that time in American history, some ranchers preferred more colorful, paint horses. The American Paint Horse Association was formed to record and track stock horses of color.

Buckskin refers to the distinctive tan or gold color of this breed of horses, interspersed by black points on the tail, mane, and lower parts of limbs. This is a color breed whose members are easily identified by appearance.

Buckskin horses can be purebreds of a variety of different breeds including the American Quarter Horse but they can also be “grade” or unregistered horses. Several registries exist that will allow horses to be registered on color alone.

Like the Appaloosa horse, this breed also displays a spotted coat with white sclera, but they are also found in solid colors. These horses are attractive for rangers for their versatile colours and shiny coats.

The Tennessee Walker is a composite breed that has evolved from the Narragansett Pacer, Standardbred, Thoroughbred, and American Saddlebred breeds. The resulting breed is characterized by pleasant disposition and gentle nature, complimented with an easy gait.

The American mustang isn’t a breed in the traditional sense. Horse “breeds” are typically established by tracking pedigree and ensuring purity. “Mustang” is a generic term given to the wild horses that roam the western United States. The Bureau of Land Management (BLM) oversees their population and routinely gathers and offers mustangs for adoption to the public. Typically adoption fees start at $125.

Now that you know about some American horse breeds, would you be able to identify them when you spot them?