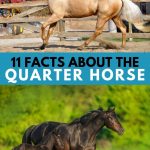 Quarter horses are often thought of as the quintessential “all-American horse”. From conjuring up visions of the Pony Express to flashy barrel runners to those good old-fashioned working cowboys’ mounts, quarter horses are all but America’s horse. So with all this horsey popularity comes some pretty fascinating facts and stories!

1. Their Population is Booming

If you guessed that the American Quarter Horse is the most popular breed in America, then you were right!

In fact, since 1940 there have been over 6 million registered quarter horses as of 2020, with approximately 80,000 new registrations being filed each year. That’s no small feat, especially considering all the different breeds and mixes there are.

From there, Texas is home to the largest chunk of the population with over 420,000 American Quarter Horses living there alone.

For some perspective, in the entire country of Canada there are only 250,000 registered quarter horses. Texan cowboys – and cowgirls – will have no shortage of those trusty steeds.

Even though thoroughbreds tend to get all the glory as fast runners, Quarter Horses are actually some of the fastest equines when tracked over short distances (they are sprinters, not endurance runners).

When I wrote my article on the 6 fastest horse breeds, I learned that the Quarter Horse has been clocked at an impressive 55 mph. This speed in bursts has made them invaluable on ranches and farms.

Quarter horses are fastest at shorter distances, and most known for running the quarter mile. The AQHA Record Holder for the fastest time was the stallion First Moonflash who ran the quarter mile in just over 20 seconds.

Light horses are generally categorized as being under 1,500 pounds, meaning they are able to be quick on their feet and are a perfect fit for a variety of careers including pleasure riding, trail riding, racing, showing and ranch work, where speed and swiftness is a must.

From there, light horses can be broken down by any number of further groups including country of origin and training class. Training classes allow for stock type, hunter type, saddle type or other, with the American Quarter Horse belonging to the stock type class.

Despite their association with America’s west, quarter horses actually have their roots in Virginia, from Spanish stock, in Colonial times. (source)

Though colonists’ horses had a purpose and a use in plowing the farms, they also proved a fun diversion in the form of horse racing, in the form of thoroughbreds most often.

Not too long after settling in Virginia and the Carolinas, the colonists started trading with the Chickasaw Indians for a fast horse they were breeding, more commonly known as Spanish Barbs. These fast horses were themselves initially brought to America by way of Florida from early Spanish explorers.

The colonists then began to breed their traditional thoroughbred horses with these Spanish Barbs all the way back in the early 1600’s. Over the course of 150 years, the “Celebrated American Quarter Running Horse” was born, with “quarter” referring to the quarter of a mile most Colonial races were.

Later, the name was shortened to the American Quarter Horse and America’s favorite horse was catapulted into the mainstream.

5. The American Quarter Horse Association Began in the 20th Century

The American Quarter Horse Association (more commonly known as the AQHA) was started in 1940 with a specific purpose. Since quarter horses showed themselves to have a built-in “cow sense” (stable and level-headed around large animals, not easily spooked and a natural understanding of herds and cow behavior) US ranchers wanted to know and protect the breed’s pedigree.

The name “Quarter Horse” was fitting due to the use of the quarter mile being used as a way to determine horses who worthy for the newly formed organization. At a 1940 AQHA Executive Committee meeting, it was specified that:

“All Quarter Horses must be able to run a quarter mile in twenty-three seconds or show that they are capable of Quarter Horse Performance under ranch conditions.”

6. They Have a Decent Lifespan

Thanks to some sturdy breeding and a relatively wide gene pool, quarter horses tend to have a healthy lifespan of around 25 – 30 years, though they can often live longer.

In fact, the oldest living horse on record was a thoroughbred (aka one of the breeds that went into making the quarter horse) named Old Billy, who lived to be an astounding 62 years old!

7. One of The World’s Most Successful Racehorse was a Quarter Horse

Even though the thoroughbred racers in the Triple Crown get most of the press, it turns out that one of the most successful racehorses of all time was, in fact, a quarter horse by the name of Easy Jet.

Born in 1967, Easy Jet had 38 races under his belt, with 27 of those races ending in wins. He was named the Champion 2-year-old colt in the same year  that he was also named the World Champion Quarter Running Horse and Champion Stallion, which is an honor rarely bestowed on a horse so young.

He also has the distinction of siring three future racing winners. In the 1980’s, Easy Jet’s breeding shares were worth over $30 million. (source)

Unlike their more high strung ancestors (ahem, thoroughbreds), quarter horses are generally considered to be pretty laid back. They are level-headed, stable, intelligent and adaptable.

Because of this stability, the American Quarter Horse is a great choice for a family horse and a safe choice for a child’s first horse. They also are adaptable to herds, so make excellent additions to farms with established horse herds.

Yes, of course the offspring of two quarter horses is considered a registerable quarter horse, but did you know that a quarter horse/thoroughbred cross is also recognized by the association?

Quarter Horse / Thoroughbred crosses are called Appendix Quarter Horses and they can be competed in officially recognized quarter horse events.

10. There Are Distinctive “Types” of Quarter Horse

When it comes to categories of quarter horses for breeding, generally they are categorized according to physical and aesthetic qualities, identifying them as one of three types: bulldog/foundation, halter or thoroughbred/hunter.

This conformation generally is found in ranch or farm work. They have the right stamina to be true workhorses and have a sturdy, stocky build, especially where the legs and hindquarters are concerned.

Their shoulders will be solid and very muscular, their withers round and their chests barrel-shaped. Bulldog types are defined by strength and stockiness.

This type is more reminiscent of the old, foundation bloodlines though horses do not necessarily have to be foundation to exhibit this type.

The quarter horses are a contrast to the bulldog type. They tend to be sleeker and narrower in body type, but still with strong muscles.

Their head will often be longer and elegant – not quite as dishy as an Arabian or a thoroughbred, but certainly less broad than a bulldog type quarter horse.

If they have some bulldog type qualities, they will generally be used for western competition events. If they skew more to the thoroughbred characteristics side, they will most likely be entered in racing events.

This quarter horse will be a mixture of the bulldog and thoroughbred types. They will typically possess strong muscles, a refined head and neck, and be shorter backed.

They are typically bred specifically to compete in halter though some are versatile enough to ride as well.

11. Quarter Horses are a Rainbow

The American Quarter Horse can be found in a wide array of colors. Sorrel, Chestnut and Bay are the most common colors, but they can come in gray, dun, buckskin, black roan and even palomino! Some horses may have white markings in the form of stars of blazes on their faces or socks or stockings on their legs.

On the more rare spectrum you might see American Quarter Horses in colors like grulla, champagne, silver and even Appaloosa. Yes, that’s right, there are some registered purebred AQHA horses with Appaloosa coloring.

I hope you have learned a few tidbits about the American Quarter Horse with these 11 facts. They are a truly versatile breed that any horseman should try to own at least once in their lifetime.