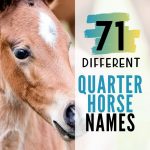 Choosing a name for your quarter horse doesn’t have to be difficult. There are, however, several factors you will want to take into consideration. A registered name for a horse can always be different than their “barn” name. The registered name, though, is what their show records and foals will reference.

Factors To Consider When Naming Your Quarter Horse

If your quarter horse is related to a famous horse, even several generations back, you can highlight that by using that horse’s name or a portion of it in your horse’s registered name.

Doc O’Lena was a famous stallion. A champion in the cutting arena who sired many champions. You can bet that if you see any quarter horses with the word “Lena” in their name, that somewhere they trace back to Doc O’Lena.

Even Doc O’Lena himself was named after his parents. His dad was Doc Bar and his mom was Poco Lena. When he was registered, his owners combined the two and that’s how Doc O’Lena got his name.

The color of your horse can also help you pick his or her registered name. The famous reining stallion, Hollywood Dun It, just so happens to be a buckskin dun (dunskin). His sire was Hollywood Jac 86 and his dam was Blossom Berry. Part of his name came from his sire’s name “Hollywood” and “Dun It” refers to his color.

When that cute little foal of yours is firstborn, before you send the registration papers in you may have started calling him or her by a nickname. Another thing you can do is include that nickname in the registered name. I had a friend whose foal was nicknamed “Lady” who was sired by Major Burnett and out of the mare, Generals Dynomite. That foal was registered as “Lady Always”.

Words Commonly Used in Quarter Horse Names Based on Pedigree