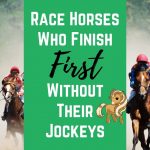 The world watched collectively at the 2019 Preakness as one thoroughbred racer, Bodexpress, bucked off his jockey right out of the gate – and then kept on running! All that excitement, though, served to raise a rather interesting question for casual viewers and racing fans alike.

However, there are a variety of disciplines – and factors – that go into contributing to a jockey-less ride that can disrupt the status quo.

Even though when you think of horse racing, your mind may conjure up only specific thoughts of thoroughbreds and fast, flat tracks, there are actually a number of different types of racing.

The “a horse must have a rider” rule does not exist in the racing world just to be a buzzkill, but, rather, there are a number of reasons why having a seated jockey matters: from keeping the race fair to keeping the horses safe, the “jockey must stay on” school of thought exists to serve a purpose.

As mentioned, there are more types of racing than just the flashy thoroughbred events publicized as jewels in the triple crown.

In each different type of horse racing, there are some common reasons why jockeys are important. The biggest reason of all is that they keep the horse on the correct path which lessens the threat of two horses running into each other and causing an accident. But let’s take a closer look at the role of jockeys in each racing type.

Flat racing is arguably the most recognizable form of racing. It is run, as the name suggests, over flat and level ground.

The length of the track can vary, as well as the material of the track itself (turf or dirt or synthetic), but the end goal is always the same: the first horse to cross the finish line the fastest is the winner.

Here, jockeys are employed less so for steering and strategy capabilities but more so as the driving – and braking – forces of the horse. They encourage their mounts to speed up, they do their best to hold a horse back when needed, and they more or less let their charges open up to cover the most ground, all while reining in for safety when needed.

These jockeys are sought after to be aerodynamic and light, so as to not weigh a horse down, so you are probably used to seeing them be short of stature on the ground.

Another popular – though less well-known – form of racing is the steeplechase. This builds upon the basic concept of a distance race and adds in obstacles for horse and rider to jump over, all while still aiming for a winning speed.

Steeplechase jockeys need to be experienced not just in riding on flat ground but also in jumping and cross country. A competent rider is needed to control the horse in this instance – to ensure they fly over the jump rather than avoid it, to count strides to jump safely and to keep up the momentum of speed.

Harness racing, then, is a third form – one that involves a bit more than a single horse and rider.

In harness racing, horses are hooked to light, two-wheeled carts (called a sulky) and are raced at a specific gait. The jockey in this case is seated in the sulky and controls the horse behind rather than on top.

Having a jockey in this discipline is of utmost importance. A horse hooked up to a carriage without a person in control of the situation would be a disaster.

Picture it: frightened, panicked horses spooking and most likely injuring themselves plus breaking the sulky, let alone not being focused to finish a course. The jockey helps to keep things under control and also makes sure that his own sulky doesn’t collide with any others in the race.

While there are some height and weight maximums, the restrictions are way less intense than in flat racing or steeplechase racing. This makes sense, too, as the rider is not directly joined with the horse and the physics of leverage decrease the effects of a somewhat heavier jockey being pulled along behind.

Why Jockey Weight Even Matters in Horse Racing

All horses are essentially ‘weighted’ – i.e. they are assigned to carry a designated amount of weight so that each animal is carrying the same total.

Plainly put, in this instance, a horse without a jockey would be carrying around 120 pounds less than a horse with a jockey. That would mean they are lighter, more aerodynamic and able to run faster.

Similarly, a horse that is burdened with a jockey that is too heavy will be at an instant disadvantage due to the extra bulk. The horse would have to work just that much harder and run a bit slower than if it is carrying a load equal to its pony opponents.

It is for that reason – the spirit of fair play and equal opportunity to win – that these weight restrictions and additions are put into place and enforced so strictly in horse racing.

Loss of Equipment – Not Loss of Jockey

What, then, may happen if a jockey loses a vital piece of equipment but still stays on? If the rider is able to stay on but the saddle or bridle falls off – can it still be considered a winner in a race?

This can be seen as an interesting gray area. Technically, with the loss of a piece of heavy equipment, the horse is at a new and unfair advantage as it still retains its guiding force (the jockey) but has instantly become many pounds lighter.

In fact, that “as long as a body is on the horse, that is what qualifies as eligible for winning” has gone to some extremes. In 1923, a steeplechase was won by a horse whose rider, Frank Hayes, suffered a heart attack mid-race and died.

Though he was pronounced dead at the scene, since technically his body remained on the horse, they were still declared the official winner of the race. (They did, however, skip the traditional post-race weighing in and unanimously decided to not contest Frank Hayes as the winner.)

There have been instances of a girth breaking and jockeys tightening their grip in the nick of time to remain mounted. Though the saddle is gone, the rider remains, meaning there is technically no grounds for a disqualification.

So can a horse win a race if it has lost its jockey? In terms of spirit, it is very much possible. Technically, a horse with heart and drive (and an uncanny instinct to run in the same direction as the herd towards the finish line) can cross the final post before the other horses.

Does that count as a win, though, in the eyes of the officials and according to the rulebook? There the answer is no. Without a jockey on-board, a horse is considered disqualified and, as impressive as his or her run may be, it is not within the legal bounds to take home a trophy.

One thing is for certain, though, and that is that those riderless racehorses tend to win the hearts of an eagerly watching public. And isn’t that what really counts?