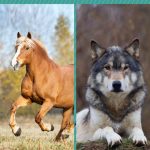 Horses are well known throughout the world for their speed and stamina. Horse racing is one of the oldest human traditions in our relationship with our equine friends. But just how fast can a horse gallop – and is it fast enough to escape from predators?

Can a horse outrun a wolf, a lion, a bear, or a car? A horse’s top running speed depends on many factors: its age, breed, size, condition, and general health. The average healthy saddle horse can gallop at about 25-35 mph. On paper, the answer is clear: the horse loses every time. But if you explore the problem more deeply, the answer is not so simple.

Which is the fastest?

If we lined them all up in a starting gate and they sprinted toward the finish line, which would come in first? On paper, the answer is clear: the horse loses every time. But as we explore a little more deeply, you’ll see that it’s not that simple.

Can a horse outrun a wolf?

Wolves in North America were almost driven into extinction by hunters and ranchers. Because they’ve made a comeback in recent years, occasional clashes with humans and livestock are unavoidable. Horses are prey animals that congregate in herds for protection. One of a horse’s greatest assets is its fight or flight response – and horses usually choose flight.

The quarter horse is one of the most common working breeds in the US, and they are often found on ranches in the same areas occupied by wolves. Relatively short and stocky but equipped with slender legs, quarter horses are the sprinters of the equine world: they can reach speeds of 50 mph over short distances.

Wolves can reach a top speed of 35 mph while chasing prey. But wolves regularly traverse over large areas of territory, and they must prioritize the conservation of energy. Wolves are also much smaller than other predators, and horses can pose a serious threat if they choose to fight. To a wolf, a healthy quarter horse with a good head start is not prey worth pursuing.

Who would win? The horse.

Can a horse outrun a lion?

Lions live primarily in the grasslands of Africa. A group of hunting lions can reach top speeds of 50 mph when chasing prey. They hunt animals like antelope, zebra, and the slower moving water buffalo. They are strong, fast, and well-equipped to take down even the fastest and largest animals in the grasslands. An average saddle horse would likely lose if the lion was determined, and close enough to strike.

Arabian horses are one of the most common breeds in Africa; they have been fine-tuned over generations to gallop quickly over long distances, and they possess more stamina than a winning thoroughbred. Young Arabians in good condition can easily reach 40 mph, and maintain a strong pace for miles.

Lions, on the other hand, will only chase prey for short distances. They also aim for weak or sick animals within a herd – this allows healthy ones to escape. If an Arabian spots a lion on the prowl and flees before it gives chase, it has a chance of getting away. The lions would likely abandon the horse for more easily caught prey. But generally speaking, a lion would overtake a horse with little difficulty, even one as strong and swift as an Arabian.

Who would win? The lion.

Can a horse outrun a bear?

Despite their large size, bears can reach a top speed of about 35 mph. They live in mountainous and wooded regions, and they are adept at maintaining this high speed uphill or downhill. However, bears don’t spend a lot of time running unless they have to: like other predators, they prioritize the conservation of energy. This gives an advantage to prey animals such as caribou, deer, and horses, which can run swiftly for longer distances.

While the average saddle horse may be evenly matched with a bear for speed, bears are more adept at navigating hilly terrain. A horse unfamiliar with the hillside of a bear’s territory and separated from his herd may find himself in trouble.

Most bears will retreat at the sight of a human on a horse’s back and will avoid a noisy group of riders. Running inspires a bear to give chase, so riders should avoid it. But, if a horse is alone and chooses to run, its odds are favorable as long as the area is flat and free of obstacles. A bear is unlikely to overtake a horse in this position.

Who would win? The horse.

Can a horse outrun a car?

Thoroughbred horses are bred for speed and stamina. Their long legs allow them to cover a lot of ground in a single stride, especially around a flat track. But which one would win in a race?

Modern cars built for speed can reach up to 250 mph. The average sedan or minivan can easily reach 70-80 mph and would have no trouble against even the fastest thoroughbreds. Even though your average horse wouldn’t stand a chance against the cars of today, consider a time in which horses and cars shared the road.

The Ford Model T is widely regarded as the first commercially available car to the masses. In the early 20th century, cars appeared on the roads in great numbers, and they began to replace horses as the primary method of transportation. These early cars could only reach 45 mph, which is about as fast as a quarter horse can gallop for a short distance. It would theoretically be possible for a horse to win in a race against a “Tin Lizzie”, especially if the car is an antique. But modern cars? Definitely not.

Who would win? The car.

Other questions to consider:

What are the fastest horse breeds?

Believe it or not, there are more than 180 distinct horse breeds. Some horses are bred for strength and size, like the Belgian or the Clydesdale. Some are bred for small stature and to work closely with humans, like the miniature horse. And several different breeds are specifically designed for speed, stamina, and agility: the thoroughbred, the quarter horse and the Arabian are some of the most common.

These special horses have a much better chance of outrunning a predator.

Which horses have the fastest speed records?

The top speeds of specific racing horses are well documented. Winning Brew, a 2-year-old thoroughbred filly holds the Guinness record for fastest race speed over a quarter mile in 2008: 44 mph. Stone of Folca achieved a speed of 42 mph over the half mile in 2008, and the famous Secretariat reached 49 mph during the Belmont Stakes in 1973. Double Down Special is a quarter horse who achieved a world record of 55 mph during a quarter-mile race (this is how quarter horses get their names). Arabians that run distance races in the unrelenting desert can clock an average speed of 25 mph for more than 75 miles!

At what age can horses run the fastest?

This depends on a few factors. Thoroughbreds begin racing at very young ages, often between 2 and 3. However, horses aren’t fully mature until they’re around 6 or 7. Generally speaking, a young healthy horse will perform the fastest between the ages of 3 and 10, but this can vary between individuals.

Is the gallop the fastest gait?

Most horses have four distinct gaits: the walk, the trot, the canter or lope, and gallop. Horses walk between 3 and 4 mph, trot around 8 to 10 mph and canter at 10 to 17 mph. The gallop is the fastest: at one point, all four legs are off the ground! This is the gait that we’re talking about when we’re considering whether a horse can “outrun” something.

Certain breeds can perform special gaits at great speed. The “rack” of an American Saddlebred, the “pace” of a Standardbred, and the “flying pace” of the Icelandic horse are all two-beat gaits (like the trot). But horses moving in this way can reach speeds of 25-30 mph, which is as fast as an average horse can gallop. However, most horses in a field would choose to gallop away from a predator, as this gait naturally covers the most ground in the shortest amount of time.

Horses are prey animals, and speed is one of their evolutionary advantages. Their ability to run quickly for great distances protects them from predators. Combine these advantages with thousands of years of breeding for speed and stamina, and now some horses can outrun wolves and bears. However, even the fastest horses are no match for a hungry lion, and a car would defeat them all in a test of speed.