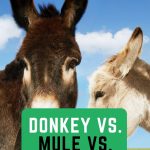 To the average equine appreciator, the terms “mule” and “donkey” are often used interchangeably. They look similar, sound similar and their breed names are used, somewhat unfairly, similarly in metaphors and similes (“stubborn as a mule”/”stubborn as a donkey”). It may surprise you, then, to learn they are actually two separate animals! But just what sets them apart from each other?

A donkey is its own unique species while a mule is a cross between a horse and a donkey, specifically a male donkey and a female horse (a mare). Further, mules are sterile and cannot reproduce. A mule can only come from crossing a donkey with a horse but cannot (in most cases) continue a bloodline.

What is the Difference between Mules and Donkeys? Which is Considered to be Better?

Donkeys and mules may look and seem similar at first glance, but they are actually two fully separate animals. As such, there are a number of differences between the two. Let’s look at them species by species:

To start with, donkeys are also a separate species from horses. Though they both belong to the equine family, donkeys are smaller, more compact and stockier than horses and have longer ears, coarser fur, and a thicker, shorter mane.

Donkeys have a reputation for being on the stubborn side, but the truth is that they have been reliable work animals for ages, transporting people and goods with unparalleled stamina.

Donkeys, however, are very compatible with horses – so compatible, in fact, that they can breed together. When a male donkey breeds with a female horse, you get the mule.

As a result, mules genetically inherit the characteristics of both their parents, so they have similarities to both donkeys and horses. Because of cross-breeding, though, mules are born sterile and unable to have baby mules of their own. The only way to get a mule is to breed a mare to a male donkey.

When it comes to physical traits, donkeys are almost always easily identified thanks to their long ears – they almost look like the rabbit version of an equine. Because a mule is part horse, though, they can have ears that cover any amount of length.

It is not only the ears that can differ, though: donkeys backs are rather wide and flat. Unlike horses, they do not have a bump at their withers above the shoulder. Since they are more compact, too, they naturally have smaller hooves.

The donkey’s coat is much coarser and generally thicker than that of a horse and they possess equally bristly manes. Their tails are more like that of a cow: an extended tail bone covered in short hair.

Mules, on the other hand, can be physically similar to both a donkey and a horse and there is no one set physical descriptor that all mules will meet.

As such, they are not always as easy to identify, as they may very closely resemble on or the other – or look a perfect hybrid of the two. In general, they tend to inherit from the donkey side of the family when it comes to a flatter spine and longer ears.

The most common characteristics of their horse mothers that they take on include being larger in size than a donkey and possessing a more delicate, less hearty bone structure.

Further, mules have demonstrated having superior vision to both donkeys and horses and an ability to differentiate their environment much better. This may contribute to them being among the most sure-footed of equines, too.

This gene split makes the well-suited to both hardy, transport work like donkeys as well as the same riding disciplines of horses.

There is also the age-old question of one being better than the other. That is fully subjective and depends on what qualities you are looking for or what work you need done.

When it comes to use as a pack animal, it is again split: the donkey has the greatest endurance but the mule, thanks to its larger size, is able to carry more weight.

Aside from their physical differences, donkey and mules differ in their personalities as well. Donkeys have a reputation that precedes them when it comes to being stubborn.

Mules lean a bit more on their horse genes and can be easier to train, making them more ideal for riding activities and shows. Mules can be aggressive, though, without the proper training and depending on the temperaments of their donkey and horse parents.

Donkeys are also historically stoic when it comes to discomfort. This can be to a fault, as they will usually not show any outward signs of distress when sick or injured until the ailment has significantly progressed. Mules, while also pillars of strength, do tend to show more acute signs of being in pain or distress.

Also, donkeys have a reputation for being very level-headed. They are almost unflinching, no matter what comes along.

Mules, while way less spooky than horses, do still have more of a fight or flight instinct than donkeys, thanks to their horse blood. Just like horses, too, they benefit from repetitive training and positive reinforcement. They are clever and want to learn, it is just a matter of speaking their language.

What is the difference between a donkey, a mule, and a jackass?

After you have the differences between mules and donkeys down, you can throw in a third similar animal name that gets used a lot: the jackass. What sets the jackass apart from the other two?

The twist here is that a jackass is not necessarily a different animal – it’s a specific donkey! “Jackass” is simply another term for a donkey: specifically, a male donkey.

It is reserved for males of the donkey genus only, though, and is not used to describe a male mule. The correct term is Jack for the male donkey and Jenny or Jennet for a female donkey.

Are a burro and a donkey the same thing?

You may also hear the terms “donkey” and “burro” used interchangeably. Are they really the same, though, or are they different animals?

Here, the difference is, again, slight and more of a matter of terminology. Biologically, a donkey and a burro are fully the same animal, but a burro typically refers to one that is wild, while a donkey is generally used to describe the domesticated animal.

From a linguistics and geographic viewpoint, too, burro is actually the Spanish word for donkey. So, while in the United States “burro” is commonly used to denote a wild donkey, that may not be the case overseas.

The Hinny – Just What Is That?

A hinny is very similar to a mule. A hinny is the result, too, of cross breeding a donkey and a horse, however it is the reverse of a mule’s parents: in this case, a male horse (a stallion) is bred to a female donkey (a jenny).

The same rules of reproduction apply, though, and they are just as sterile as mules. They have temperaments and traits both physical and intelligence-wise similar to their mule relations, as they are still inheriting half donkey and half horse genes.

Their main difference between the hinny and the mule is that they tend to be a little smaller and maybe more horse-like in appearance, though the rest of the outward traits stay the same.

Donkeys and mules are very closely related. Though they may look – and sometimes act – quite similar, though they are very distinct. Thanks to intelligent cross-breeding, we not only get to enjoy the stamina of donkeys but also the trainability of mules.