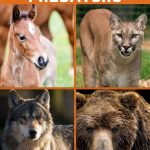 Horses are prey animals. In the wild, they spend most of their time walking, grazing, and standing in groups – ready to flee from predators at a moment’s notice.

What animal eats a horse? Mountain lions, wolves, bears and alligators all eat horses. Of those listed, attacks from mountain lions are most common.

The Wild Mustang Is Not Native to North America

The term “wild horse” is a bit of a misnomer. Only one species of non-domestic horse exists today – the Przewalski’s horse or Mongolian wild horse.

Herds of wild mustangs are managed by the Bureau of Land Management. When their numbers increase to the point where their land can’t support them, they are rounded up and adopted out to people all over the country.

Mustangs are more likely to succumb to a lack of resources and disease, rather than predator attacks. But, they instinctively keep a watchful eye for any threats – which include some species of wild carnivores.

Because horses are not native species to the Americas, they have few natural predators – however, several large carnivorous animal species will prey on mustangs if provided the opportunity.

Wolves and mountain lions (also known as cougars or pumas) pose the biggest threat, but packs of coyotes, feral dogs, or even alligators have been known to attack young or injured horses.

Due to human intervention, the territories of managed wild horses and large predators don’t usually overlap – so they rarely run into one another out in the wild. Also, horses are physiologically and instinctively well-equipped to handle them, so these predators usually seek easier game. (source)

Still, if you live in an area where large predators are present, take precautions to protect your horses and other pets. Plenty of predators will seize the opportunity to snack on a young domestic horse, especially one that is alone in a paddock. A savvy wild mustang in a large group – not so much.

Horses might be prey animals, but they are formidable opponents for even the largest predator. Horses have a variety of tools to protect them from predator attacks.

Natural Predators of the Mustang in North America

Even though most large predators don’t waste their time with wild horses, they still pose a threat to the American Mustang. If the perfect opportunity arises, these animals will attack.

As settlers moved westward, wolves were almost completely eradicated due to conflicts with cattle ranchers. Today, wolves are still a relatively scarce sight in the lower United States – most grey wolves live in Canada and Alaska.

Because of this, they generally pose little threat to wild horses. However, packs of wolves are capable of taking down big game such as moose and elk, and horses are fair game if the opportunity arose.

A mountain lion can take down prey many times its size. One of the horse’s only natural predators, a solitary young horse would be no match for a puma, if the puma manages to sneak closely enough undetected.

However, their territories often don’t overlap. Mountain lions often prefer rocky mountainous terrain where they can move stealthily and get a height advantage, and horses tend to stick to open areas of prairie and grasslands. Still, mountain lions can and do hunt wild horses. (source)

Wolves and mountain lions pose the biggest threat to wild horses, but there are other large predators that horses will avoid. However, these animals tend to attack mustangs if desperate, or if the opportunity presents itself. They generally prefer to hunt smaller game, like fish, birds, or small mammals.

Grizzly bears can reach 800 pounds – they’re the largest living carnivores in the US. Despite this, they are opportunistic.

Grizzlies can and do occasionally prey on horses, but they much prefer easier game – it takes a lot of energy to get all that mass moving, and they normally wouldn’t bother chasing down a healthy horse.

While a grizzly is fast enough to outrun a horse over short distances, a group of healthy horses with a head start would easily escape. Bears pose more of a threat to solitary, penned domestic horses and cattle.

Coyotes are considerably smaller than wolves. They mainly prey on squirrels, rabbits, birds, and other small animals.

Coyotes are clever pack hunters, and they rarely start a fight that they might not win. Horses are too large, and they pose too big of a threat to a coyote’s health for him to bother.

Still, if a pack of hungry coyotes stumbles across a young or injured horse, they may seize the opportunity.

However, alligators are only truly effective hunters when they’re in the water – and most clever horses will avoid swimming or taking long baths in alligator-infested water.

Occasionally, groups of feral dogs will form packs. While they mostly cause trouble for cattle and other domestic livestock, dogs tend to be bolder and more aggressive than wolves or coyotes. A pack of dogs may give chase to a wild horse herd, causing death or injury to horses accidentally.

Wolves and coyotes occasionally mate with domesticated dogs, creating new hybrids. “Coydogs” and “wolfdogs” don’t always act according to their behavioral characteristics, and can cause problems for wild horse herds. Still, these clashes are rare and are mostly a problem for cattle ranchers and farmers (rather than the mustangs).

Other Threats to the Mustang

Even though wild horses don’t have many natural predators, life on the prairie is still dangerous. Here are some examples of other threats to the mustang – some predators don’t necessarily want to eat him, but he needs to be wary all the same.

Before 1971, wild horses were hunted, or rounded up and sent to slaughter. The Wild Free-Roaming Horses and Burros Act of 1971 declares “that wild free-roaming horses and burros are living symbols of the historic and pioneer spirit of the West…and that they shall be protected from capture, branding, harassment or death.” (source)

The Bureau of Land Management is responsible for certain herd areas, called herd management areas, designated by the 1971 act. There are, however, wild horses roaming on land not covered by this act. Those horses are managed by other agencies. For more details, check out my post on types of wild mustangs in America.

When wild horse populations reach critical levels, they are rounded up and either adopted to willing families or housed on private farms and feedlots. But because they have few natural predators, the Bureau of Land Management and other agencies are trying to curb their numbers in other ways.

Wild mustang populations continue to rise faster than they can be adopted. Horses compete for resources with cattle, and they can cause significant damage to the land.

Even though humans seek to prevent harm from wild horses, once a mustang is rounded up and sent to a new home, he’s no longer living freely. Some would argue that this makes the human being the biggest threat to the wild mustang – but he’s mostly worried about those sneaky mountain lions.

Today, several organizations work to promote the trainability and versatility of the wild mustang. The Mustang Heritage Foundation works together with the BLM to pair trainers with horses in events like the Extreme Mustang Makeover. These events provide valuable training to horses while also showcasing them to the general public.

Each of the predators above is far more dangerous to a domestic horse than a wild horse for several reasons.

A wolf does have the ability to kill and then eat a horse, however, due to their low numbers, attacks are not common.

Can a horse kill a wolf?

A horse is capable of killing a single wolf or dog. Most horses, however, choose to flee rather than fight.

Cougars can and do hunt horses for food though they are most likely to be successful when hunting young foals or injured horses.

How do horses protect themselves?

Horses have two mechanisms to protect themselves, fight or flight. Most horses will choose to flee rather than fight however a stallion or mare with a young foal are more likely to fight if threatened.

Though the horse isn’t native to North America, there are still “wild” free-roaming animals on the range. Both these wild animals, and their domestic counterparts, can face predation from natural and “unnatural” predators.

When managing your domestic horses, care should be taken to protect them, as much as possible, from predation. Be aware of what types of predators may be in your area and work to employ possible countermeasures. That may mean having a guard dog (or donkey), fences, lighting and more.