The Thoroughbred is one of the most widely celebrated horse breeds that exist today, but there’s a lot you may not know about these majestic speed machines. Here are 21 interesting facts about the Thoroughbred horse.

1. A Thoroughbred is truly “thoroughly bred”

Thanks to the meticulous record-keeping of the current Thoroughbred registry (the Jockey Club) and English horse breeders in the 17th and 18th centuries, all modern registered Thoroughbreds can trace their pedigrees back to one of three foundation sires – the Godolphin Arabian, the Byerly Turk, and the Darley Arabian.

2. They have deep English roots, with Arabian influence

Developed during the reigns of King James I and King Charles I, local English horses were bred with swift imported Arabian and Barb stallions.

As the sport of horse racing grew in popularity, the breed was refined to create fast, athletic horses with great endurance that matured quickly.

3. A breed recognized around the world

While horse racing has been a popular tradition for thousands of years, Thoroughbred racing began in England. As British influence grew, they began to export these fine steeds to the far reaches of the globe.

Today, Thoroughbred racing is popular in the United States, England, Australia, Ireland, Japan, India, Saudi Arabia, New Zealand, and many other countries all over the world.

4. Only live breeding is allowed

The Jockey Club only allows Thoroughbreds to be bred using live covering – that is, both horses must be physically present for breeding to take place.

No artificial insemination or use of frozen embryos is allowed.

This controls the number of mares a single stallion can cover in a season, and thus preserves the bloodlines (and as a result can protect the price point for more valuable offspring).

5. They’re a tall breed, but they didn’t begin that way

Thoroughbreds are known for being lanky with long legs, but did you know that the very first Thoroughbreds stood only 13.3 hands high? That’s about the size of a large pony! At the beginning of the 18th century, racehorses barely cleared 14 hands.

However, by the 1750s, their average size had increased to 15 hands. Some of the most successful modern racehorses have stood over 16 hands high, although most Thoroughbreds still reach an average height of around 15 hands.

6. All Thoroughbreds have the same birthday

Every January 1st (or August 1st in Australia) all registered Thoroughbreds celebrate another birthday and gain a year in age. This provides standardization for the racing industry, although it can give an advantage to horses born earlier in the year.

Originally, English colonists had celebrated their racehorse’s birthdays on May Day (May 1s) in line with English tradition. Eventually, the Northern states adopted the January 1st birthday (as it had been changed in England). But the Southern states would not concede to the change until after the Civil War. So for a time, racehorses in America had two different birthdays!

7. They’re not just used for racing

Only 50% of all racehorses that begin a racing career ever win a race. And, because a racehorse’s career is often over before the horse reaches 5 years old, many Thoroughbreds successfully transition to other disciplines.

It’s quite common to see these athletic horses in eventing, showjumping, dressage, or even barrel racing!  They can also make excellent pleasure family horses, as long as they are treated properly during their transition from the racetrack to the local schooling barn.

Naming a new baby racehorse is no easy feat. The Jockey Club rule book lists 17 different conditions for naming a Thoroughbred, and will immediately reject any name that breaks one of these rules.

Nonsense words or other “made-up” terms must be explained, and any words in a foreign language must be sent with an English translation to be considered. Owners must submit 6 different name choices, and the final decision is up to the Jockey Club.

Solid-colored, that is. While “The Pi” was a famous painted steeplechaser in Enid Bagnold’s classic, National Velvet, nonfictional modern-day racehorses are usually solid bay, black, brown, chestnut, or gray.

Thoroughbreds may also be palomino or roan, but never dun, pearl, or champagne. A few purebred pinto Thoroughbreds can occasionally be seen on the racetrack, and they make quite the splash when they do!

While all horses are warm-blooded mammals, the terms “hot-blood” “warmblood” and “cold-blood” are colloquially used to describe a horse’s temperament and type.

Hot-blooded horses are known for being excitable and nervous, while their cold-blooded draft counterparts are levelheaded and unflappable.

This does not mean that all Thoroughbreds are flighty, but they may require a little more patience when training them not to spook at a terrifying tarp on the ground.

Thoroughbreds are known for their figurative “big hearts,” giving everything for their people on the racetrack or field. However, they often have physically large hearts and lungs than other horses. This allows their bodies to work more efficiently at high speeds.

The famous racehorse Secretariat had a heart that weighed a whopping 22 pounds!

Once they begin their racing careers, Thoroughbreds are tattooed on the inside of their upper lip to make it easier to identify them and to discourage theft.

Each tattoo begins with a letter of the alphabet, which signifies the year they were born. Four or five digits follow the letter, and you can look up a particular horse’s registration number on the Jockey Club website. Check out our post on Thoroughbred tattoos for more information!

While quarter horses are faster over short distances, Thoroughbreds dominate the track at a longer race. The average top speed of other horse breeds is around 30 mph (although your average pasture puff isn’t accurately timed during a gallop around the field).

The average speed of a racehorse is around 37-40 mph, but they can reach up to 50 mph during a race.

In 2008, a 2-year-old filly named Winning Brew set the Guinness Record for the highest race speed recorded over two furlongs, covering the distance in just 20.57 seconds.

In 1949, a chestnut Thoroughbred named Huaso set the high-jump world record by clearing an obstacle that was 8 ft 1inch high (a record that still stands today).

Trained for two years specifically for this feat by a Chilean army captain, Huaso was 16 years old and cleared the obstacle on his third attempt. After his record-breaking jump, he was immediately retired and never ridden again.

Thoroughbreds are often bred to other breeds to improve their speed, endurance, and refinement. Popular Thoroughbred crosses include:

Warmblood breeders looking to improve specific talents of their horses will often cross their animals with a Thoroughbred.

Warmblood studbooks that are open to Thoroughbred breeding include the American Warmbood, Westphalen, Dutch Warmblood, Hanoverian, Holsteiner, and Danish Warmblood (among others).

Many horses have suffered catastrophic injuries while on the racetrack, resulting in an untimely death.

The famous Derby Winner Barbaro shattered his leg just weeks later during the Preakness Stakes, and ultimately had to be euthanized as a result. Activists have cited the high rate of Thoroughbred injuries as one of the reasons to end horse racing altogether, and the debate is ongoing.

18. They can suffer from health issues

Thoroughbreds have smaller feet relative to the size of their bodies, which often results in hoof problems such as soreness or lameness. They are also prone to exercise induced pulmonary hemorrhage (bleeding from the lungs), and low fertility.

These health problems may be attributed to the higher rates of inbreeding amongst members of the Thoroughbred breed. They may also be a result of selectively breeding for speed – rather than good health and longevity. However, horses that have never suffered injuries on the track can live a long and healthy life, which for most horses is around 20-30 years.

19. They can be one of the most expensive breeds

Because a racing Thoroughbred can earn its owner millions at the racetrack, they often fetch quite a high price when sold at auction. Here are the final auction prices for some the most expensive thoroughbreds ever sold:

Less notable racehorses can fetch anywhere from $1,000 to $500,000 and beyond. However, most racehorses retire early from a racing career.

If you’re looking for a Thoroughbred for another discipline, you can find one on Equinenow for between $1,000 (a project or pleasure horse) and $30,000 (a well-trained eventer or jumper).

There are many organizations that facilitate a Thoroughbred’s transition from the racetrack to other disciplines, such as CANTER or other rescue groups. These horses are commonly referred to as “OTTBs” or “off-the-track-thoroughbreds.”

While OTTBs can make excellent partners, they must be treated with care and proper training so that they transition well from life at the racetrack. If you’re interested in adopting an OTTB, make sure that you have the proper knowledge and guidance from a professional, and check out our post here for more information.

Every year, the Thoroughbred Makeover takes place in Kentucky. OTTBs compete in over 10 different disciplines with only 10 months of training. These horses are then sold or adopted out to new homes to live a life beyond the racetrack.

Lukas, a retired Thoroughbred racehorse, was abandoned and neglected before being adopted by trainer Karen Murdock. She discovered that “Lukas could not only recognize his reflection in a mirror, he understood when an object was absent when it should be present, indicating ‘yes’ or ‘no’ by tilting his head, as well as the ability to identify shapes, letters, and most importantly numbers” (source).

Lukas currently holds the Guinness record for “most numbers identified by a horse in one minute,” unofficially making him the “world’s smartest horse”. 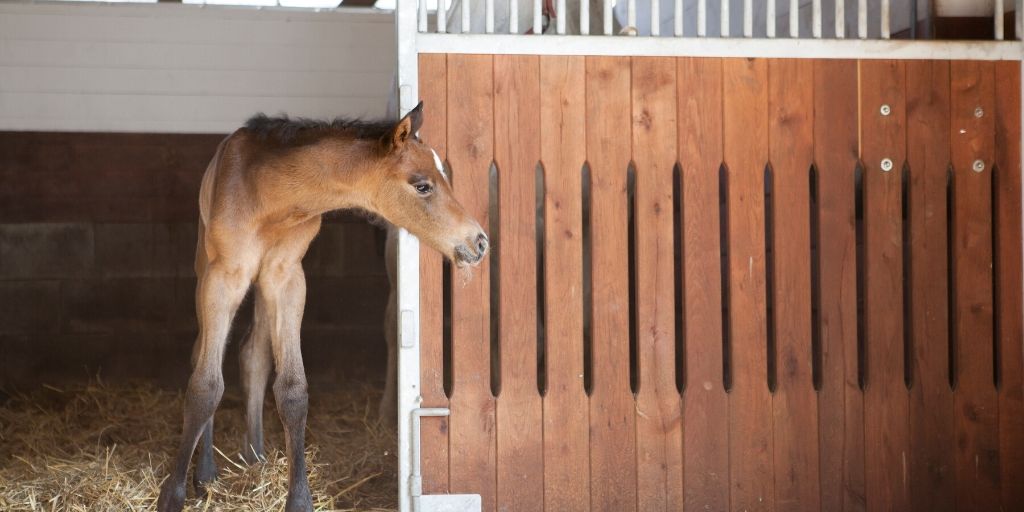 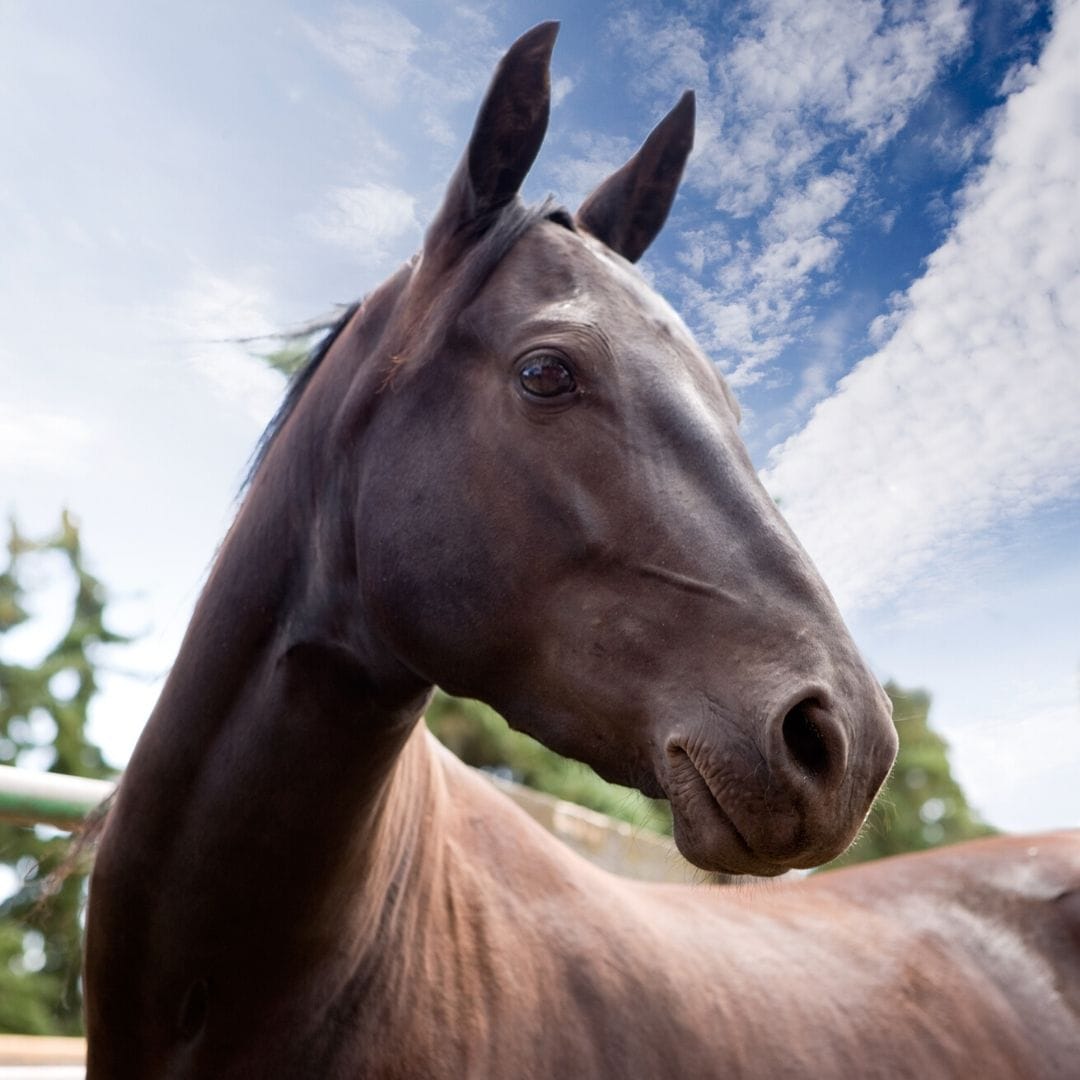